A big reason I picked the Vero 4K+ was because it had powerful hardware and a bunch of people recommended it as a good way to get into the Plex space. I run PMS on my Synology NAS and Plex for Kodi as an addon works*…but it’s simply not in development any more.

So that’s where the * comes in, there’s a fork of the original Plex maintained addon by pannal GitHub - pannal/plex-for-kodi at develop and I think if OSMC were to include this out of the box or via the upcoming App Store, it would be just fantastic.

Have you tried PlexKodiConnect?
So much better than the official Plex client.

Have you tried PlexKodiConnect?
So much better than the official Plex client.

I haven’t used it, but I’ve seen it in videos and read about it. I prefer the official Plex UI if I’m honest.

Trying to understand why it wouldn’t belong in the App Store. It’s a popular app and it would make things much easier for those of us who want to continue to use PMS and Plex as a native client.

Trying to understand why it wouldn’t belong in the App Store.

Because it’s a Kodi add-on, not a separate binary install as the app store items are.

I think you will find it is also not fully compatible with the Vero 4K , I found that anything 4k was being transcoded and would not play at all. I hacked around with it for quite some time and could not get anywhere.

It works ok for everything else and my kids use it because the interface is easy to navigate.

I have two Plex servers so the app is useful if you need to switch between servers as PlexKodiConnect, even in beta does not allow two servers to be synced at once. One or the other.

The purpose of OSMC running Kodi is not for Sam or any other developers to load up apps that may or may not work with the device in question due to the nature of whatever conflicts may arise and that is not what we use OSMC for. Repositories and addons are so simple to install and keep updated. You are welcome to PM me if you need a little extra help.

The app store is for applications that will help the functionality of OSMC.

Anyone here is free to create their own repository and app store with the know how. Too many third party apps and legalities with the use of Kodi are another reason. I would prefer that Kodi stays totally clean and fresh, if you want to load it up with garbage to stream whatever illegal torrent, etc. That is not something you are going to receive support from on this forum.

So is the Plex app for Vero not up to date currently? I’m looking to buy a Vero just for Plex use but if the Plex app situation is in a bad state I may hold off

The official Plex add-on is officially maintained by Plex, not us.

I have no idea about its state. I’m sure others can comment. A good number of our users use Plex on Vero, so you’re not in uncharted waters.

Obviously there is a money back guarantee, but I would suggest you don’t buy the device if you’re not comfortable with it or haven’t received significant assurance from other users of Plex.

I use it , the issue that i have is that it tries to transcode 4k/Hevc content that the Vero4k can play natively, …which depending on your server is troublesome

On your plex server try going to the settings>network>“List of IP addresses and networks that are allowed without auth” and add the IP address of your Vero (assuming your server is on your local network).

I think there is also an option to disable transcoding if you don’t need that feature for other devices.

Thanks for reply , tried all the options even played around with profiles, the disable transcoding code is not actually working …a few people mentioned that is with the way it works with the AMlogic chip and not being able to figure out the true capacity , hence it transcodes…anyway you can use plex kodi connect as a work around , it just does not give you the plex interface you may be used to…Vero4k ia a great box it just the plex addon that is a bit sucky

That doesn’t sound right at all.
Do you have a link to that? If there is a problem, it’s something we’d like to fix

I don’t have a Vero, but when I tried it on my Raspberry pi I had issues with it not wanting to use direct play. That network setting fixed the issue. With direct play the server is just handing the file directly to the Vero.

Interestingly, it looks like this may have been fixed recently , at least there is a code hack provided in this link Two 4k remux playback issues (quick hacky fix included) · Issue #224 · plexinc/plex-for-kodi · GitHub

I will report back if it is working now.

My setup has all my content on a Synology NAS with playback handled by the Vero 4k+, all wired gigabit LAN. The NAS runs PlexMediaServer and Vero 4k+ runs the (ancient) Plex addon.

The Vero 4k+ does Direct Play for all my high-bitrate content just fine. I have a resume issue for 4K media which I have a support ticket and Sam is looking at it (fingers crossed!), but playback isn’t an issue. 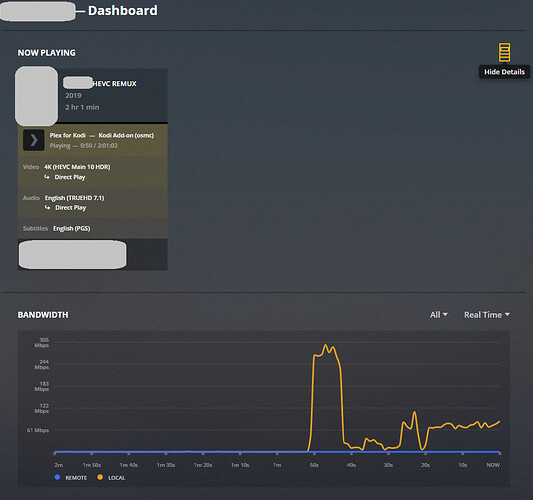 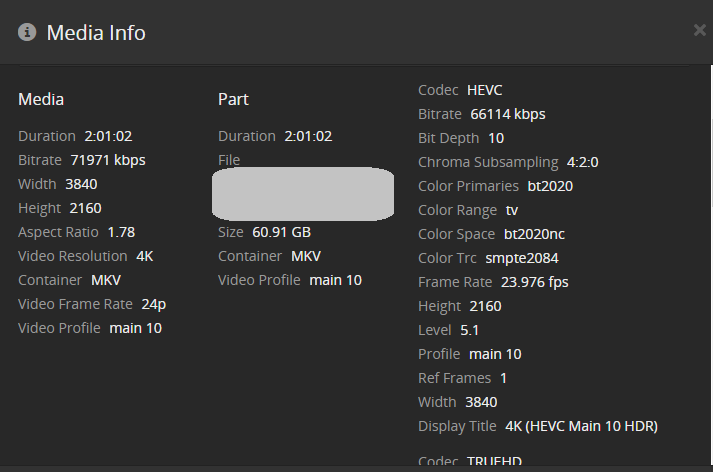 How did you configure direct play …the version i have 0.16 only has debug logging as an option in settings ? Did you do something on the server side ?

Ok For anyone having this transcode issue that i faced , this fix worked for me and now all the files that were not playing are fine - which is great .