I have built a system with an RPi2B and OSMC RC3 plus a USB connected 1 TB EXFAT formatted hard drive. The Pi does have an Edi-Max WiFi plug but is configured to not connect to the Internet (borked the default gateway) but it is connected to the WiFi network so I can access it using the YATSE app on my Samsung phone.

Now I would like to have a simpler system such that my phone and Yatse is not needed to run Kodi.
So I am looking for some kind of physical remote control solution that could be applied here.
The TV I connect it to is not CEC capable so I cannot use the TV remote.
What are my alternatives here?

The number is legion.
There are some which the Pi specialist shops sell as ‘works with Pi’, but these are not, in the main, any better than others on the wide market.
I think that remotes which feed a USB dongle are better than the IR interface - but that is a personal opinion.
Mostly it is a matter of booting with the interfacing bit plugged, it gets detected - and that is most of the work done. There are a couple of places in the settings to check - but don’t turn on the bit for IR remotes unless you have one plugging to the 40pin Pi connector.
Any fine tuning of what each key does can be effected via SSH.
Derek

The TV I connect it to is not CEC capable so I cannot use the TV remote.

We have the OSMC Remote which we currently sell: https://osmc.tv/product/osmc-remote-control-for-raspberry-pi/

It is TSOP IR based, but it is extremely sensitive, works from about 9M away and does not need line of sight. It works out of the box after OSMC RC3 without any additional configuration.

For what it’s worth, I really like my setup of a MCE ir USB receiver (I expect any will work, mine’s an old one I had around) with logitech harmony smart control. It’s a really nice remote to use (not the touch screen one). The only config you need to do is in the logitech app.

For faster text entry, I also have an Rii 8+ mini wireless keyboard with touchpad (http://cordcuttersnews.com/upgraded-rii-i8-wireless-mini-keyboard-review/) which just worked with no config required. You could just use that if you’re not interested in the logitech smart control …

We have the OSMC Remote which we currently sell: https://osmc.tv/product/osmc-remote-control-for-raspberry-pi/

… not to take away from the official OSMC product, that looks very nice and I’d have given it a try if I didn’t already have my logitech and Rii bits

Thanks,
by Googling I have seen some examples of remotes that use a USB connected receiver (sometimes on a short cable) that plugs into the Pi and then “just work”.
Unfortunately I have not found one in any store near me and I have a time slot that does not allow waiting for on-line purchases to be delivered.

I think I will have to wait for a couple of weeks until I am back home again, was too late in thinking about this alternate control remote…

But to add to the confusion:
I have a number of remote controls available, for example the remotes for an old Nokia VCR, a Sony DVD player, a Motorola Set-top TV box and a Topfield PVRt recorder. Would it be possible with an IR receiver on the Pi to make any of these work as a Kodi remote? I.e. is there a way to “teach” OSMC/Kodi the codes it produces when the appropriate keys are used? I think that what I need are at minimum:

If that would be possible then I might need only the IR receiver for the Pi, which I can probably pick up at the local computer shop tomorrow morning…

Get yourself a GPIO IR receiver for the Pi - they are cheap and allow almost ANY IR remote to be learnt. For example with mine I can use the official OSMC remote, an Xbox 360 media remote and a white Apple remote equally well.

At the moment teaching lirc a new remote requires using irrecord via SSH but it’s not too difficult. Alternatively there are large databases of lircd.conf files for most remotes which will typically work with just minor changes to the key mappings. For example:

There are also a number of pre-defined remotes already in the OSMC remotes section that you can choose from.

Thanks!
I looked at the closest electronics shop (their webshop) and found an IR receiver that is connected to the computer by USB. It is in Swedish but here is the link to the page where you can see how it looks like.
http://www.kjell.com/sortiment/dator-kringutrustning/datortillbehor/tangentbord/ir-mottagare/flirc-ir-mottagare-universal-p87012

So it is not a receiver hooked to the GPIO pins of the Pi. Would that disqualify this product?

Depends if it exposes itself as HID or not

Edit: I see you’re looking at a FLIRC. I believe that can be used with OSMC.

Unfortunately I have not found one in any store near me and I have a time slot that does not allow waiting for on-line purchases to be delivered.

FLIRCs work well, but the trickiest part is configuring them to work with your chosen remote.
I use Windows software, but linux stuff is also available (see flirc.com I think).
Comparatively speaking, they are expensive, but have a good range and aren’t too directional.
Derek

EDIT: Correction for your link: it is https://flirc.tv/
Seems like they support RPi too based on the product gallery.
So I guess I could use one of these then, will head out and buy one and then try it with the Motorola Set top box remote. This is how it looks like: 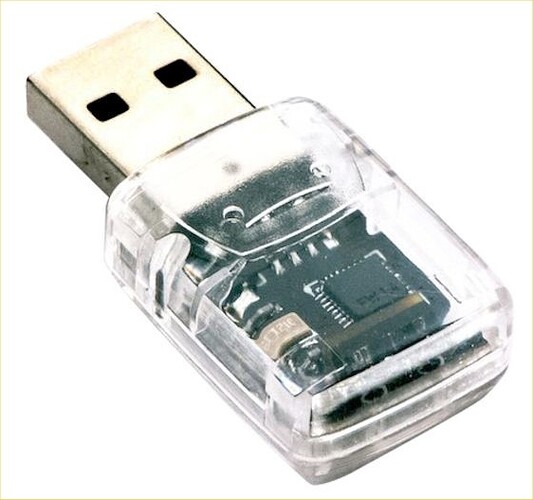 FLIRC_Receiver_USB.jpg562×527 109 KB
It seems so much simpler to just plug an USB device into the Pi as opposed to soldering together an IR photodiode and associated components and connect to the GPIO pins…
sam_nazarko 7 July 2015 08:28 #12

No soldering needed, you can just attach a ribbon cable.

Personally I wouldn’t use a Flirc in this application.

The Flirc is great and I have one myself on my Mac Mini installation of Kodi, however there is a lot of set-up involved as the Flirc itself is a learning device that can learn the IR code from any button on any remote and will then output a keystroke as a virtual USB keyboard.

To do this learning you need to plug the Flirc into a Mac/PC and go through a learning process with a custom application with your remote and decide which keys should be sent for which buttons, which requires some familiarity with all the keyboard shortcuts in Kodi. (For example did you know that X is stop ? Or that TAB toggles fullscreen mode, or F8 is mute ?) This is very time consuming and I spent a lot of time customising mine to get it working just right.

A GPIO IR receiver will also allow you to learn any remote but doesn’t have the whole extra abstraction layer (and additional complexity) that the Flirc presents.

Another factor is that a Flirc is rather expensive compared to a GPIO IR receiver - about 5 times the price.

I realized the price difference but since I am heading out toward the OSMC unit in just a few hours I need something plug-and-play that I can lay my hands on right away. The nearby stores carry RPi:s but not the hobbyist extras needed for the IR receiver. But one does have the FLIRC receiver.

I can cope with the FLIRC setup once out on location and I guess I can Google for the Kodi keystroke sequences for the important buttons.
Thanks for the info!

Make sure you download the Flirc configuration application before you go to your location with no internet access or you won’t be able to set up the Flirc…you can download it from their website. I would also take a copy of all the Kodi keyboard shortcuts from the Kodi website.

No probs with Internet access, we have Mobile Broadband out there. What I had an issue with and you helped solve is that I don’t want the RPi to be on-line because any operating system update or even use of play services will drain the monthly allotment of data…
I have downloaded the FLIRC setup for Windows already and I will now look for the Kodi keyboard shortcuts (since the FLIRC seems to emulate a keyboard…).
Thanks again!

Hi again, I’m now on location and have mowed the lawn so I am allowed to attend to the FLIRC business.

After I tested to program the remote using the basic functions I discovered that there is a setting to program it for Kodi!
So I erased the previous programming done using the key-map wiki page and just clicked the Kodi keys displayed on screen and the corresponding remote key.
Easy-peasy…
Then I plugged it into my running OSMC Pi2B USB slot and it started working right away!

So I am a happy camper right now, thank you for all your help and information!!