My apologies if this has been addressed earlier, a search did not seem to show anything related to it. I am trying to use the Pi 4 with 2GB RAM and when I try a SD card with the 2021.08-1 version, I get the error message shown in the attachment. It is complaining about the start4cd.elf. I have to stay with this version because of other issues related to playing slide shows from folders that have both pictures and videos. 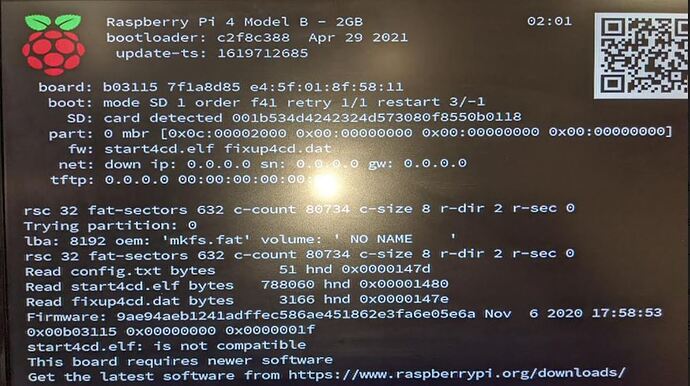 Pi4 was not supported at the time of that release. Newer release will be required. 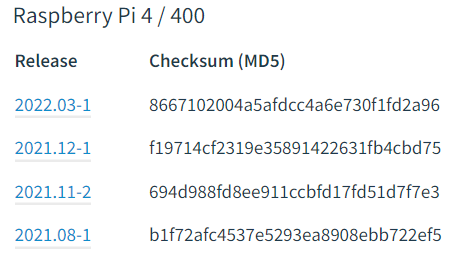 I copied some files from the latest release to the 2021.08-1 release, and that seems to have worked, I have to wait and see whether the slide show freeze problem will show up.

You need to update the EEPROM on your device I think.

Thanks, but how can that be done without the rpi-eeprom-update command? Raspberry Pi 4/400 EEPROM Firmware Update/Recovery Guide - Trying to install that did not seem to work, the package could not be located.

Is this an outdated version?

Is there a specific reason you chose to use the 2021.08-1 release and not the latest version?

After Debian Bullseye is released, I can merge further upstream changes, but this is lower on the list of priorities at this time Sam

I installed Raspbian, upgraded the EEPROM. Now I have:

I then tried to used the 2021.08-1 release, it gave me the same error about start4cd.elf. So I gave up, copied the non-image files from the latest release, and got it working.

The other issue I have is that the 5GHz wifi SSID does not show up with any OSMC release, only the 2.4 GHz wifi SSID. I see some hidden network with a strong signal. But no problems with regular Raspbian, both SSIDs show up and I can connect to either.

The other issue I have is that the 5GHz wifi SSID does not show up with any OSMC release, only the 2.4 GHz wifi SSID. I see some hidden network with a strong signal. But no problems with regular Raspbian, both SSIDs show up and I can connect to either.

You can try with connmanctl via command line.
Otherwise my suspicion is that your 5Ghz network channel is > 100 or you need to set the CRDA world regulatory domain.

Connmanctl services also shows a hidden network after a wifi scan. wifi_e45f018f5812_hidden_managed_psk
5GHz channel is at 157, is that a problem with OSMC, but not with regular Raspbian?

You need a newer version of OSMC; or lower channel.

I can switch to a lower channel or stay with 2.4GHz, not a major problem. I don’t recall seeing the 5GHz SSID even with the latest release, but I could be wrong.

Regarding the issue of slideshows with pictures and videos crashing with the newer Kodi version, is that an OSMC fix or is that something that has to be taken up with Kodi?