Should samba run on the raspberry Pi or on the router?

I have a raspberry pi which runs like a server. It downloads torrents and saves them in an external HD connect to it. Would it be better in terms of performance for my other devices which uses the files on this HD to plug it in my router instead ?
The HD is properly structured with temp folders used while downloading files so that my other devices won’t scan incomplete downloads.

Would it be better in terms of performance for my other devices which uses the files on this HD to plug it in my router instead ?

Is your Pi connected wired to the router? If that is the case I don’t see an advantage of moving the disk to the router.

It is. But for my other devices, wouldn’t the transfer rate of files for example with osmc be faster if done by the router instead of the raspberry pi?

Sorry if it may seem dumb, I don’t have much knowledge about networking yet.

It is. But for my other devices, wouldn’t the transfer rate of files for example with osmc be faster if done by the router instead of the raspberry pi?

Well I doubt your router would be able to serve files via samba from USB drive much faster than 100 Mbit. But if you are so concerned just make a simple test. Transfer a big file while disk connected to OSMC compared to when connected to the router

Will try it tomorrow, and post the results. Thanks!

if You are using osmc and downloading the file from other device at the same time then MAYBE You will notice a difference. But I believe that the good system design would be to attach hdd to the router because then You do not need osmc to be running to access files on hdd - this is better if for some reason your osmc is down. This is how I designed my system and i’m happy with that. But be aware that 2.4GHz routers (at least most of them) do not work with usb 3.0 due to interference problem, this is what I learned the hard way … so i’m connecting my drive with esata.

Routers typically are not designed to be efficient file servers.

so I guess that every modern router with file server functionality will perform better.

so I guess that every modern router with file server functionality will perform better.

But in my post i was refering to hardware aspect - file server that needs to fetch data trough usb 2.0 (theoretical limit is 480MB/s) and then send it to the router with 100MB ethernet is just not a good file server.

We need to build an OSMC NAS.

Currently you can install Samba Server from the App Store. It should just work.

Need to find an SBC/SoC with SATA connections that also meets the requirements for video output and also isn’t dependent on a closed ageing kernel.

Sadly not an easy task.

OrangePi would be a start but IIRC it requires an old kernel and closed blob drivers. 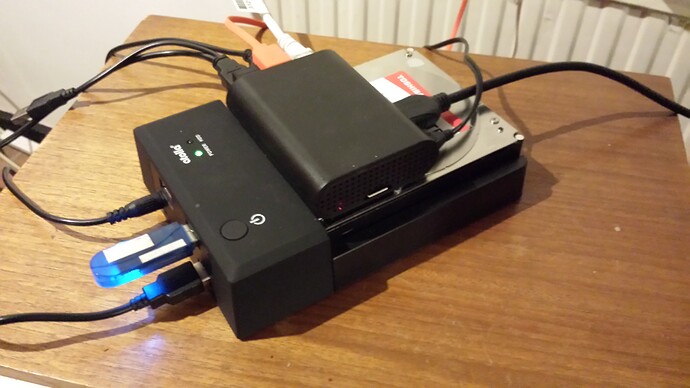 I’m gonna test it when I arrive home, couldn’t do it last week.

About the OSMC NAS, would it be able to run on a Raspberry Pi or Vero or it would be necessary to produce an extra dedicated HW something like an all in one box ?

It would run (mine does) but on RPi, everything goes through the USB bus so you would struggle if the whole family wanted to stream 4k at the same time.

It would be a cool concept to be sure, but I’m not sure an ARM device could keep up with a full on sickbeard/couchpotato/sabnzb RAID-based NAS PVR solution. Even my 10 year old ex-gaming Intel rig now running OMV is throwing resource low alerts every other day.