If you can ssh in to the Vero, https://osmc.tv/wiki/general/accessing-the-command-line/ does

Hey,
I just tried. Restarting the service doesn’t change anything. I still have a No Signal

Could it be as simple as a poor antenna or antenna connection?

Does it impact recordings as well?

Then, I followed this guide: Watching live TV with a USB DVB tuner or network TV tuner

So, I selected French as my language, 192.168.0.0/24 as my authorized network, selected network 3 (Sony CXD2837ER DVB-T adapter) and Generic as pre-defined muxes (previously, I used the realtek adapter).

The scan finds 57 muxes and 40 services.

I activated the TVHeadend client, and tested the live tv. Everything worked smoothly.
Then I rebooted the Vero4K just to test if it’s ok after a reboot and… yes

Thanks, and I hope this post will eventually help someone else.

Now I’ll go back to bed

I just tried it again. And if the reboot problem is no longer here, I still have the shuttering issue…

After some time, I have to reboot the vero4k to have a smooth experience with live TV. No problem with the audio, only the video is shuttering. Lots of artefacts, and lots of lags.

I’ll try to send you a debug link.

And here’s a recording of the live TV with the shuttering I’m experiencing:
https://send.firefox.com/download/d902b6f5169bde74/#3sfv6CwW7tesBzO6CHERbA

Yup, that’s crap. It’s the sort of result I get if the antenna signal strength is poor.

You’re saying that by the video or by the logs?

Because if I reboot the device, everything is much better for some time (say 10/15 minutes).

The video is crap. What signal strengths are you getting from the status tab of the tvheadend webui?

Then, after a while… The signal drops to 47.5dBm with 30.8 db s-t-n ratio. That’s when the video shuttering occurs.

If I reboot the vero4k, I go back to a higher signal.

The signal drops to 47.5dBm

Testing here - I get problems when the signal strength is less than about 40dB. But if I select ‘Force old status’ in the DVB Input settings I have no problems. Try that.

grahamh, would you marry me?

Thanks a lot. This solved my problem.

Hi,
I’m experiencing the same issue.
Where can I find the mentioned settings:

I select ‘Force old status’ in the DVB Input settings

?
I can’t see it under DVB Inputs -> TV adapters in my Tvheadend web interface.

You may need to change view to expert to see it. 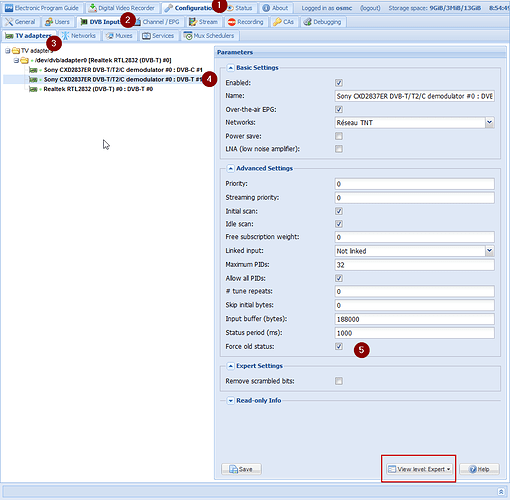 As Tom says, you have to be in expert view mode.

Thank you both. I found it after changing the view to expert.
And it works!

This won’t be needed after the next update

Will I need to uncheck the force old status after the update?