Hi there, I would like to realize a project of mine and therefore need a little help.

I got my hands on an old vga projector and would like to create a “outdoor cinema station” for the summer.

The plan is to view the movie with the projector and to listen to the “movie-audio” via a multicast stream that will be received by an app on multiple smartphones.

Why so cumbersome?
Well we want to watch a movie in the garden, but don’t disturb our neighbors

I plan to use a Raspberry PI B+ together with the projector and a wifi-router.
The Raspberry would be connected to the router via lan cable.

All i need now is a way to stream all audio output of the Raspberry to a multicast address.

I did some digging, but couldn’t find exactly what i was looking for:
The first article looks promising, but it was more meant to capture audio from a usb-audio card and not the general system audio, plus i could not get it working on my raspberry: 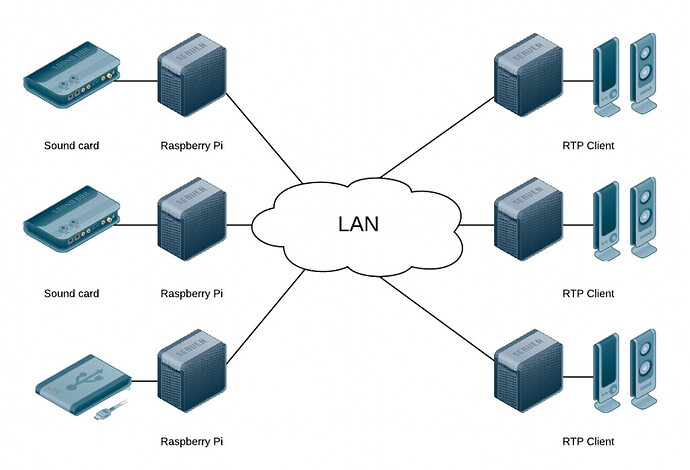 Note: This guide has been written in 2011. Since this time, the software used in this project has changed a lot. The guid won’t work without changes. Take it as a guideline and adapt it where…

Here i found another article about streaming audio to rtp, but could also not get it working (was not sure about the audio source , also the pulseaudio deamon was always failing to start with this configuration).

Pulseaudio to output RTP to internet

This page was focused on delivering the audio to a bluetooth usb dongle, but with a few hints and examples i found interesting:

Hi, I installed Alsa drivers on Raspberry Pi with OSMC. In KODI Audio output, I can select: ALSA: PulseAudio Sound Server or ALSA: Playback/recording through the PulseAudio sound server. If I select one of them there is no sound from audio jack or HDMI. Is it possible to stream from Raspberry Pi via bluetooth to bluetooth speaker and use audio jack/HDMI at the same time? Thanks.

What I learned so far, I most likely need pulseaudio. But in which configuration?

Could somebody please help me?

Hi there,
I’m unearthing this old thread to discuss this topic, outdoor raspberry pi based cinema.

The hard bits, from what I can see, are:

The last option sounds like the cleverest to me. No complex software to install, a boombox, a phone with earphones, a basic music player, all of these can tune in to the radio station and just play the sound, in sync. A bit like the decentralized dance party.
So, no real answers from me, but more food for thought