Hi, is there a way to stream the video from V4K addons to your LAN and by able to watch it on a tablet, phone or smartTV?
The web interface and the Remote apps do not provide this functionality, so far I could find.
Some of them seems to allow music streaming and even the cover art, but no video.

The OpenWebIf web interface to the Enigma2 boxes can stream multiple simultaneous live HD content to LAN, and these boxes are generally poor in specs when compared to V4K. Also there are solutions like SAT2IP, or DVB2IP doing the same thing.
Why not an OSMC2IP ?

This isn’t possible at this time. Maybe in the future something like this could be made possible, but it’s a long way off. It would probably be best added to Kodi rather than OSMC itself.

I use Plex installed on the Vero 4K to stream stuff to my Chromecast and it works fine. You have Debian at your disposal so I bet there are other kinds of software that do what you want.

If you want to stream to a Chromecast you can do that with the paid-for version of the Yatse app. No Plex required.

Yatse needs bubbleupnp paid version to work and a server where transcoding is done.

The Vero is capable of transcoding on the fly with plex and stream to chromecast.

@aeroform just install plex server on the Vero and set it up. Then use the plex app or the cast command on the web gui to send the video to the chromecast

Yatse needs bubbleupnp paid version to work and a server where transcoding is done.

This is from the yatse app 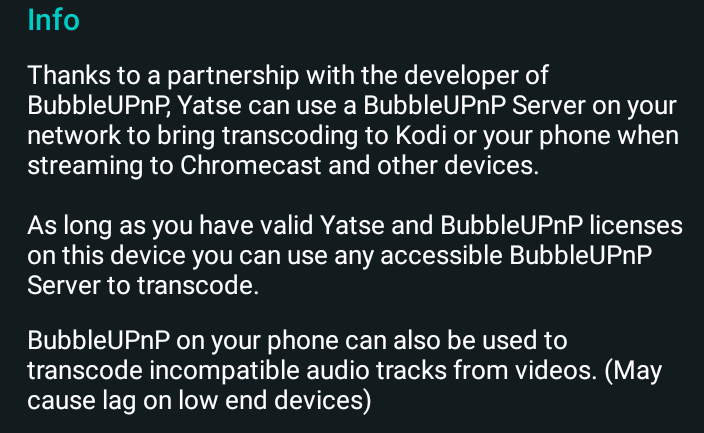 Awesome, thanks! Do you happen to have some sort of tips on to how to get it done (not exactly a linux expert). I found this thread, do you think these instructions will still work?

Also, would Plex replace Kodi/OSMC altogether or would they both run alongside each other (ie the tv directly hooked up to the vero would still show the kodi ui etc?).

Thanks again for your help, appreciate it!

I actually run Yatse + BubbleUPnP right now, it works well but I’d prefer to not have to use a 3rd device to stream. I don’t use Android normally so right now I have a old phone just for this single use and it’s a hassle to keep it charged etc.

I found this thread, do you think these instructions will still work?

They don’t as dev2day shut down his version and handed it over Plex. I believe the current method is found [here].

Also, would Plex replace Kodi/OSMC altogether or would they both run alongside each other (ie the tv directly hooked up to the vero would still show the kodi ui etc?).

Plex server and a Plex client are two very different things. A Plex server would be something running in the background and it does not interact with Kodi in any way. There is a Plex client add-on for Kodi that acts similar to other Plex client apps and another that basically hacks Kodi’s database to use the Plex information.

You can fall down a rabbit hole here pretty easy, and support for much of this on this forum is going to be limited. I would encourage you to spend some time looking around the Plex forum learning before deciding to take this path.

Awesome, thank you! I have some limited experience with Plex and Linux so hopefully should be able to get it running. Thanks for confirming the plex server wont interfere with the Kodi/Osmc set up!

Time to stress test the vero