I am wondering why the vero 4k plus is using 2,3 watts in suspend mode. That is the same amount of power when it is turned on and being in idle. Is there a way to make the vero more power efficient in suspend mode.

Due to the rising electricity prices i have been checking which of my devices at home are using a lot of power. I started testing all of my devices how much power they are using when turned off/standby.

I was wondering if there is a way to lower the power usage of the suspend mode.

You would need to manually enable/disable the Mediacenter running on the Vero to reduce the power usage.

ok sounds complicated. Why is that action not included when i push on the suspend button. Or are there disadvantages when the mediacenter is stopped when going into suspend.

Why is that action not included when i push on the suspend button. Or are there disadvantages when the mediacenter is stopped when going into suspend.

Because the Mediacenter is the central control/function of OSMC and if it is disabled those functions would not work.

Normally when i push any button on the osmc remote control the vero wakes up from suspend mode. Would this still be the case when mediacenter is stopped. if so i would need to start the mediacenter again in order to play content.

if so i would need to start the mediacenter again in order to play content.

Thirst thank you for your time and quick reply. its maybe a stupid question from me but why is stopping the mediacenter when pushing suspend mode and starting mediacenter when waking up the vero. Not included in the software. Or is it technically un achievable to do so.

Some people may want the Vero to remain accessible on the network to serve DLNA media or record TV shows etc. and i think (not sure about the TV shows) all of that comes from the mediacentre software, they only want the Vero to appear to be off so that their amp/tv shuts down properly, you could say that the standby is pseudo-standby. Since the Vero uses so little power it’s designed to be permanently on like an Amazon Echo device. If you want to turn it off altogether you can do that by shutting it down but it’s then harder to wake up as you need to unplug and replug it again.

jb2cool thank you for your explanation I understand it now. I am still wondering if it would be possible to have an extra option added in the power menu something called eco suspend that put the vero in a real low power standby mode. For the people that do not use DLNA media or record TV shows.

You should potentially be able to do this should you wish, it may be a bit or work but Kodi and OSMC are all open source so you are free to make any changes that you want to.

Did you do the measurement after waiting for a bit or did you do it immediately?

The standby mode is primarily to turn off the HDMI TMDS clock but keep the device responsive and quick to wake up. This can stop the device hogging the TV or potentially hijacking it with a spurious CEC event.

We lower clock speeds on CPU (and can do so later with GPU) to reduce thermals as well.

That is a very good question. I only checked inmediately after i put the vero in suspend mode.

So i have to check it again. And wait a while longer to check the power usage after i put the vero in suspend mode .

Due to the rising electricity prices i have been checking which of my devices at home are using a lot of power. I started testing all of my devices how much power they are using when turned off/standby.

Vampire power is an important subject that manufactures have been improving upon for quite some time now. Going back a few decades it wouldn’t have been unheard of to have a TV with a cable box and VCR to consume 50-80 watts when they were “off”. Some of this still exists as I know the last I measured a Dish Network PVR it was consuming 40 watts at idle.

On the whole things in subsequent years have improved greatly and one must decide how much inconvenience they are willing to give up for the savings they get back. You have some modern TV’s that consume considerably less than a single watt when powered off. The price of this savings is that they take a very long time to power back on. If you disable this extreme power savings mode the TV jumps up to a couple watts when off but the user experience is much better. Is this worth the monetary equivalent of a couple Big Mac’s per year? It is not to some. Some will go to the extent of unplugging their equipment when not in use or using a power strip that will sense the state of a master outlet to automatically turn on/off secondary devices. The problem with doing this on a media player like OSMC is that there is a database that can become corrupted if not shut down properly and it can be hard always remember to shut it down. Is this inconvenience worth the savings of running your bread toaster once per day?

I have tested and measured the power usage after putting the vero in suspend mode again. And checked after 5 minutes then after 15 minutes and after an hour. And the power usage remains around 2,25 and 2,30 watts.

But i am going to put it behind me. its not a big deal at all. Just wanted to check what the possibilities are. If in future updates or upgrades an extra option is added to put the vero in a deeper suspend state then the current one that would be nice. if not no big deal.

This is the kind of thing that, up until now, hasn’t been financially relevant. 18 months ago, the price of electricity here in the UK was low enough that a device burning 2.3W would cost you only about £2 a year to maintain. From this October it’ll be around £10.50 a year. The cost of electricity is likely to at least double again next Spring, taking the cost to more than £20 a year, which (to me) is no longer a negligible sum. Sure, plenty of people won’t mind paying that; but there will be others looking at all of their different always-on devices and wondering if they couldn’t save themselves a three-figure sum by turning them all off.

Sure, plenty of people won’t mind paying that; but there will be others looking at all of their different always-on devices and wondering if they couldn’t save themselves a three-figure sum by turning them all off.

As someone who went through this situation (sharply rising energy costs) quite a few years ago and audited their own home and made changes to mitigate as much usage as was sensible I feel quite comfortable saying that chasing a literal couple of watts on a device that sees daily use is not the most fruitful of endeavors. Concerning yourself with a single device that uses a fraction of one percent of your total usage IMO should only be even considered once you have taken care of the bigger stuff. In my case I was surprised to find my pool was the second largest load (after the A/C as I live in a very hot environment) and making some improvements there has saved me over $1,500 USD/yr. Swapping out a secondary freezer with a efficient chest freezer netting another few hundred in savings. The list goes on but at no point did it ever seem sensible to me to lower the WAF of the TV to save $11yr. The backlit house numbers that had been running since my house was built (no light sensor or switch) was costing me forty times that much before I removed the bulb.

The Vero won’t use a lot of power, even at full tilt.

Standby is a complex situation, because we use a USB RF solution. This won’t change, even with future revisions of Vero, because IR performance isn’t great, and Bluetooth has its own issues.

Vero can be put in to a low power mode where only the AO power domain is active, and this would put us down in to about 0.1-0.2W an hour. But the only methods of wakeup would be CEC; Bluetooth; IR or WoL (not implemented but possible). Our official remote wouldn’t work, and I believe this would lead to confusion.

So the role of standby on the Vero 4K/4K+ is less to save power and more to stop hogging the TV by stopping HDMI TMDS; and reduce heat by lowering CPU frequency. We do reduce heat by lowering CPU frequency and extend device longevity a bit. But the goal is not to significantly reduce power consumption. It won’t lower power consumption by a lot, but it will lower it a bit. The numbers when active and in standby should certainly not be the same.

Out of curiosity, I had a search for how much it would cost to run a Vero 4K+ all year round from October, with the wattage you specified. 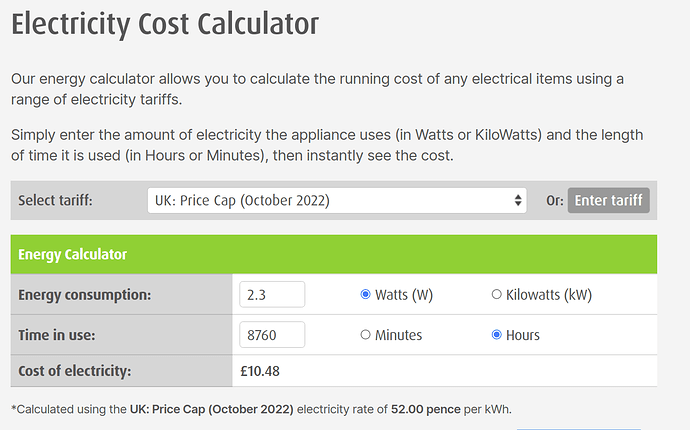 Source: Electricity Cost Calculator - How much do your appliances, heaters cost to run?.

It’s higher than I expected. But hopefully not bank-breaking.

There’s a tradeoff. Some want standby to keep networking alive so they can wake their device with their smartphone. Some want their Internet connection on their device to stay running in the background.

For example, I am using a Logitech remote with Bluetooth so for me Full standby would be great to save some power and heat.

It’s possible indeed, if you wish to compile the bootloader with your own remote wake-up codes. You will need to recompile this after every major update.

Otherwise there is no universal standard because we don’t ship a Bluetooth remote.

Keep in mind the other limitation: if Bluetooth is engaged to target a single remote; you can’t pair with another device (at time of writing)

Thank you for the advice, but I think this isn’t something for me to be comfortable with. So I keep it to the current solution, which by the way is more than fine also :-).