I am in the US and I am contemplating ordering the dvb-t2 tuner. Unfortunately the forum information is both disparate and out of date mostly.

Does it work for the radio menu option also, or just live tv?

It will work on your Pi without issue. No idea about DVB-T2 signals in the states however. Where are you based?

I am in the US and I am contemplating ordering the dvb-t2 tuner.

Unless you are aware of any DVB-T2 distribution in your area you should not go for this Dongle.
I believe US is still using 99% of all times ATSC. 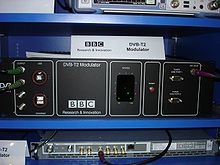 DVB-T2 is an abbreviation for "Digital Video Broadcasting — Second Generation Terrestrial"; it is the extension of the television standard DVB-T, issued by the consortium DVB, devised for the broadcast transmission of digital terrestrial television. DVB has been standardized by ETSI. This system transmits compressed digital audio, video, and other data in "physical layer pipes" (PLPs), using OFDM modulation with concatenated channel coding and interleaving. The higher offered bit rate, with re...

Ok. I can deal without tv in the truck. But radio will work, you say?

For DVB … “radio” usually means a TV signal with no video.
AFAIK the OSMC DVB tuner will not pick up FM, AM, DAB (not applicable in USA) or HD Radio.

Thanks, paulwebster! I’ll keep trying to get my rtl-sdr 2832u working then. Dmesg sees it, but tvheadend does not.