Transfer rates? and how you transfer?

I’m just curious about people’s transfer rates, in general, this screenshot is a transfer rate from a network share Samba on ubuntu mate using KDE Neon to transfer to the Vero 4k+ via ftp lol Sounds like a weird way to transfer media but it works 29.8 MiB/s. 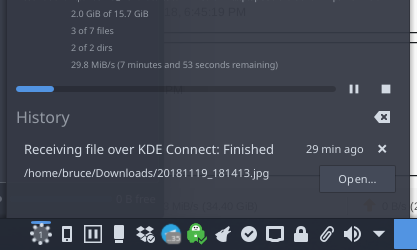 And this is what I get when I do FTP That is built into KDE Neon 38.6MiB/s 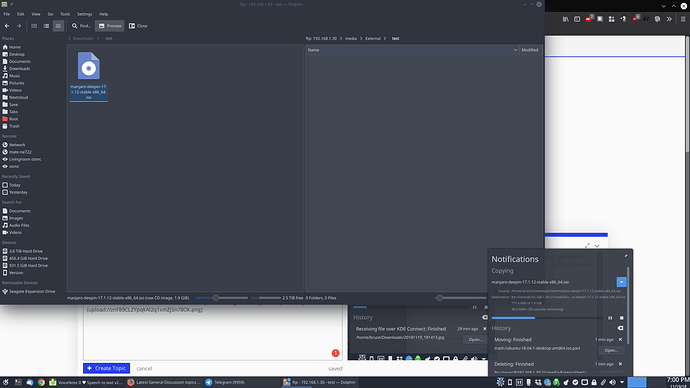 I would like to know how you guys transfer your media?

Most people don’t copy media files to the device running OSMC…they just leave them on a server and play them directly from the server via NFS or SMB.

People that do want their media files directly connected to the device running OSMC often connect the removable hard drive to whatever computer has the media files, copy them to the drive, then move the drive back to the OSMC device. Even with the gigabit Ethernet on the Vero 4K+, this is still the fastest way to get data to the device, since it has to pass through the USB 2.0 port on the 4K+. By moving the drive, you can transfer at USB 3.0 speeds on another computer.

USB 2.0 is the reason you get less than 40MB/sec transfer speeds. On other machines with gigabit Ethernet and the drive connected with a faster bus (USB 3.0, SATA, etc), you can easily saturate the network link and get 110MB/sec to the drive.

My Vero4K has a 2TB, 2.5"/7mm HDD connected via USB port. That’s also all the storage I have at home (+ an offline backup of 1TB). It contains my media for playback (not backed up), a synced backup of docs (12GB) and also 400GB of photo/video albums.
A RPi3 in the bedroom with OSMC can playback this media, the HDD is mounted via NFS.

My laptop’s and phones browse through or copy media to and from this HDD via SFTP or SMB. It’s indeed limited, in most cases by WiFi. But even if I connect an UTP cable (I have a Gigabit network) it would be limited to USB/ethernet limits of the Vero4K.

When I come back from vacation and want to transfer a whole lot of GBs of data, I simply disconnect the HDD, connect it directly to my laptop and transfer with much higher speeds since the HDD is in a USB 3.1gen2 enclosure and my laptop supports gen1 (theoretical 5Gb/s).

This works fine for me.
The speed issue only really annoys me when I want to quickly transfer some series and stuff right before I go on holiday. I don’t want to disconnect the HDD all the tjme (mounting for NFS server required me to mount the drive via fstab (not hot pluggable) on the Vero otherwise it’s not mounted before NFS server starts).

it’s as simple as Spotify. Just need enough space on your phone. I can always bring a laptop and transfer some stuff from phone to laptop on holiday. I can select the stuff I want in Yatse, go to bed and next morning when I leave it’s all there.

When I need to transfer large amount of data, I will unplug HDD from Vero and connect it to my main PC through USB 3.0. There, it run at about 80-90MB/s.

I dont need NAS or file server for streaming media to Vero. I dont see a point in this - having another super-expensive box, which consumes power, run 24/7. Just look how much those NAS costs - brutally overpriced for what its inside. For my needs, I would require at least 4 disk one, but no, I dont give them about 400euros just for the metal box with a small piece of electronics in it. And this is without drives. Just for be able to stream media to Vero4k. Hell no.

From time to time, I update media on that external HDD and its all done. And the possibility to copy media through home LAN into Vero4k, or to external HDD connected through USB to it, is very convenient. I dont see a point, why it shouldnt be considered as normal, as some people states here. Its just simple file transfer, I consider this as one of the basics which every LAN-enabled device simply must have.