I have transmission enabled and it’s been working well. Today however, I can’t seem to connect to the transmission service (neither on the phone app or the web interface) like I usually do. Internet access is avaiable, and I’m able to connect to OSMC using the mobile app (Kore), so I think it’s an OSMC-transmission issue. I tried restarting the service via:

The first time I ran the command, the web interface/mobile app was able to connect for only a minute, and then it disconnected again. Subsequent restarts failed to even connect again. Can anyone help? Thanks.

I don’t understand why it would think another instance of transmission would be running, I haven’t done anything new to my setup so this just happened out of the blue.

Now it’s going from worse to worst. I checked for updates for OSMC and it needed to restart. It did the update and whilst getting ready to reboot, it failed to unmount my HDD. Now, it’s stuck showing the following for a while:

I really do not want to force reboot this so I don’t do any damage on the HDD. This is really frustrating.

If it has remounted read only then I’m not sure what “damage” you suspect could possibly happen?

It’s stuck on that command. I actually didn’t have it mounted read-only, it initially tried to unmount and then failed. Afterwards, it said it was sending sigterm to remaining processes, then “unmounting file systems” which then showed the above “remounting” command which is weird. 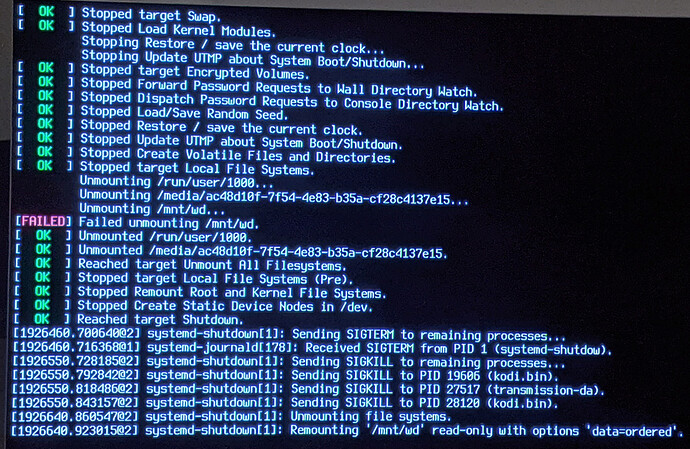 Here’s exactly what it shows. I fear there will be data-loss and/or damage if I force turn off the device. It’s been stuck on this command for a long time now. This is some poor fault tolerance from this system :|.

You have no option. Just restart. Provide logs to further seek some issue in your system.