Vero 4k is arm64 but OSMC armhf is installed by default

I just got my Vero 4k and tried to install some apps on it, but I found although the linux on it is “aarch64”, but the default dpkg architecture is set to armhf and not arm64, which prevents packages like aarch64-tvheadend-app-osmc to be installed on it. It can handle just armv7-tvheadend-app-osmc.

I think vero4k uses a 64Bit kernel with 32Bit userland. You probably won’t get a hige if any speed improvements from 64Bit userland and it might break comparibility.

Vero 4K can run armhf and arm64 packages side by side, e.g. sudo apt-get install gcc:arm64. TVHeadend should be installable from App Store. Let me know if this doesn’t work as expected.

I installed tvheadend from app store and it runs, but it can not detect my dvb adapter, so I thought maybe that’s because incompatible tvheadend-app-osmc or dvb-firmware-osmc package.

We probably need to add the driver for the tuner. It might already be in the staging repository

Sorry for late answer. I went to a watch a movie and then went to dinner.
I upgraded osmc to latest version on devel and it seems it detects and initialize my dvb-t adapter with no problem. But the scanning of the muxes fails with this log: 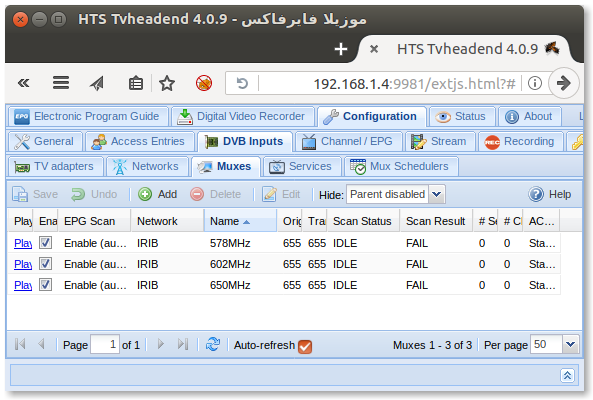 Also worth stopping the TVHeadend service and seeing if dvbscan works.

Hi. Unfortunately I am not home for two weeks due to Persian New year holidays. I’ll do that when I got home.

I already stopped and started tvheadend service several times, with no success.

Here is the new thread:

So I’m really rusty in my linux builds (it was actually BEFORE common 64bit) so can you maintains both a 32bit and a 64bit build environment?

So I’m really rusty in my linux builds (it was actually BEFORE common 64bit) so can you maintains both a 32bit and a 64bit build environment?

sudo apt-get install aarch64-toolchain-osmc will give you a build environment that can coexist with 32-bit.

But I’d recommend just sticking with armhf if you’re not sure about things, especially as the performance changes are small.

It’s more about learning the performance. When you say it can co-exist, is it like the same binary files, but you pass a different parameter to build 32 or 64? Or are the completely different binary versions/names? Thank you so much for you help, you’re amazing with all the support you give to all of this.

If there’s a google phrase that might point me in the best direction?

Have you given any thought to a Vero Auto edition? 3 HDMI ports out, each running a separate instance of kodi (but shared settings) for passengers? Guess I could go with three different vero boxes, but some kind of centralized way to manage them would be great.

I think the Vero would ve at its limits if it had to decode three different videostreams simultaniously.
Also be sure to give ot clean power in the car with a stable 5V regulator that can put out some amps.

Didn’t mean the device as it is today, per-se, more like that it would be a whole new market. Considering that even low-end video system for autos are $500+…

Have you given any thought to a Vero Auto edition?

This is quite niche and a bit outside of OSMC’s current scope.