Vero 4k the right device for me?

I hope you can help to find out if Vero4k is the right device for me.

An my final question… why chose a Vero4K instead of the Odroid C2?

Hope you can help me …
Thanks!
Chris

Well “perfectly” always is subjective. But Vero4k gives one of the best Kodi experiences in the market

no need for streams (Amazon, Netflix - doing that with a Fire TV Box)

Vero4k will do that for you. Generally the GUI runs in 1080 for best performance but TV will be automatically switched to 2160p if you play a video in that resolution (this will not happen for image display).

Yes HDR10 is supported, but suggest you search the forum a bit. While there were quite some improvements on OSMC seems some TV’s are still problematic (TV Firmware issue)

Yes that should work fine. Some AV may not report the TV resolution correctly based on the power on sequence but if worth comes to worth you always can manually overwrite that.

The 100Mbit LAN should not be a bottelneck or do you have any Video File that has a Bandwidth higher than 94mbit/s?

why chose a Vero4K instead of the Odroid C2?

Well you get 5 years software updates guaranteed and support from a developer who cares about every single issue that is reported.

The 100Mbit LAN should not be a bottelneck or do you have any Video File that has a Bandwidth higher than 94mbit/s?

Even then, you can play higher bitrate rips, but you will have to wait a second or two for the video to buffer.

Yes HDR10 is supported, but suggest you search the forum a bit. While there were quite some improvements on OSMC seems some TV’s are still problematic (TV Firmware issue)

Only a recent Samsung update seems to be causing a problem, but the users on the Samsung forum have made enough noise that it will likely be solved soon.

An my final question… why chose a Vero4K instead of the Odroid C2?

Once you add everything up (eMMC, remote, case etc), the price is very similar. I think the Vero 4K will meet your requirements.

why chose a Vero4K instead of the Odroid C2?

I had a Odroid C2 before and just switched to the Vero 4k because of the following reasons:

because of missing features

Can you elaborate? Anything in particular?

I have pretty mich the same preferences as the thread starter and I am very pleased with the Vero 4k.

I’ve just escaped Android hell with all its limitation and the Vero 4k does everything better and more stable than even the best Android box (shield tv).

Hi, i started using a Mediacenter around 2 years ago when Infuse became available for the Apple TV 4. Of course thats not an ideal setup because 24p isn’t possible because of hardware limitations and the whole database is sitting on the client and can become corrupted during an error in Infuse or after an update. Then all metadata including watched status is gone. I read many of wrxtasy’s posts on the Kodi forum and purchased an Odroid C2 + MINIX A2 lite remote and installed LibreELEC in Marc…

Is that understandable especially the second part?

Thats the area i was talking about. I need this. 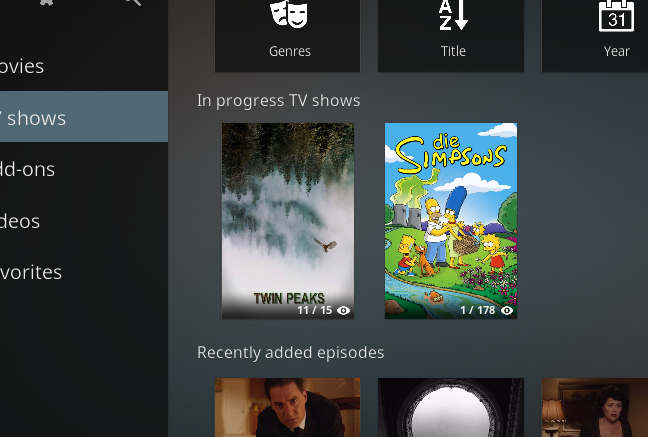 Me. But I’m from the ‘watch it when it’s broadcast’ generation so don’t have a TV show library

Thanks for clarifying - don’t know how difficult those would be to incorporate.

Quick question, do you (or anyone) have any idea what that little “eye” icon is in the bottom right of the artwork? I see it on my TV shows, but not on my movies. Just curious.

Ah, that would explain why it doesn’t have it for the Movies. Thanks!