After september update my Vero has frozen totally twice. Usually after turning off the TV and receiver using the remote.

SSH and Kodi are non-responsive and all I can do is pull the plug.

Is this after a period of inactivity?

What were you doing when this happened?

Do you see anything on the screen at all?

Yes, turn the tv off - which turns off the receiver.

After a while Vero has frozen - not responsive in yatse, ssh or HDMI-CEC. When I turn TV on the GUI is still there, so there is HDMI signal to TV.

Happened last night after update after a few minutes to an hour after. And today when I got home after work.

Can you upload a full set of logs with debugging enabled after powering it back on?

I don’t know if enough debugging is enabled:

Turned TV on and it froze.

Tried again to turn TV off - everything OK for half an hour or so.

When turning TV on it froze completely.

I really hope the logs can help. Anything I can try? some HDMI-setting that may cause this?

I’m not able to see anything immediate in your log. The dmesg log is the most useful I suspect, but that is not persistent across reboots. Here are some suggestions:

If that fails, remove the line and enable HDMI tracing:

Then after the issue occurs, upload:

and now it doesn’t freeze.

So the edid line prevents the freezing, but HDMI-CEC is dead (which I use…)

Spoke too soon - it freezes when TV turns on even with the edid line.

Will have to continue tomorrow. As of now the Vero is completely useless

Here’s what you need to do:

Remove the previous change I asked you to make previously if you haven’t already.

There is also a new Kodi build (available via My OSMC -> Updater), which will improve performance. 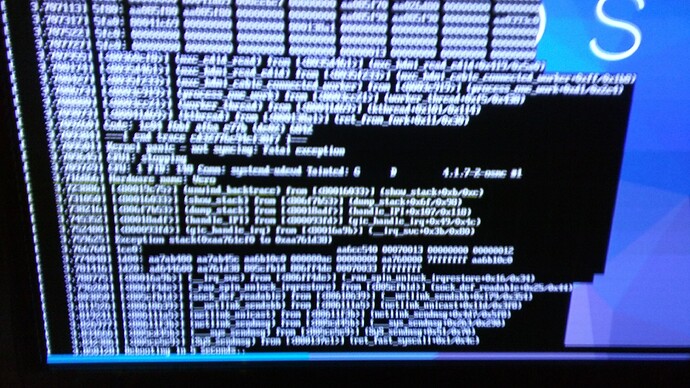 Is it possible to access the card and remove the edid line?

I have a rpi2 running osmc if its possible to Mount using USB?

uEnv.txt is on a fat32 partition so you can edit it from a PC/Mac - just remove the change you made from there.

Thanks! Saved my day - it’s up again.

Anything in the latest update of kodi, basefiles or settings that might adress the freezing issue?

Ok, it still freezes when TV is turned on!

What can be done to prevent this?

I’ve turned off cec on the vero, and that makes the freezing go away, but i miss cec.

No thoughts on this?

CEC turned off on Vero is the only workaround.