Hello
Today the most strange thing happened. Due to a NAS crash I thought I’d take one of the Lacie Rikki MS25U I had content on and put it in the vero so I could still access some of my data (fully aware of the fact that the vero might not be able to power the usb drive). When I plugged it into my vero - the vero died! I tried to power cycle it with disconnecting the power but it still did not seem to do much apart from a red light (the red cross). Please see picture. 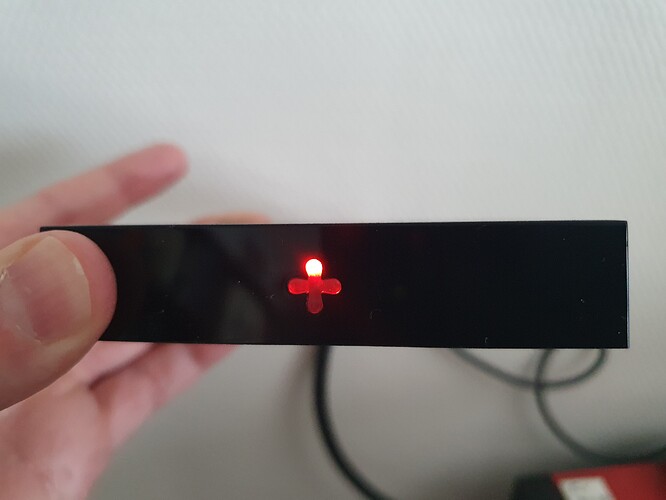 Does the drive have its own power supply?

That red light could indicate the Vero isn’t receiving enough power to boot.

Disconnect the hard drive and connect a USB A cable to the Vero and another device like a laptop.

It did not. But I disconnected it right away, so the issue is there without the drive.

I would suggest trying with a USB-A cable as suggested above and see if that helps.

Actually - simpler test. You have two Veros, if I recall.

Try the power supply from the other Vero which is working.

Oh I did that first thing. Same issue.

Okay, the next steps to try would be to:

If this fails, see if the device is detected in Device Manager when applying a USB-A cable to the white port of the device.

Nothing. Reinstall does not even seem to start, and then no device in device manager. Just a mean red LED that flashes so slightly about twice a second.
Edit. Its always on but “blinks” slightly about twice a sec.
Edit 2: I might have mistaken the 4k+ for the 4k. This could be the 4k. Would the mac help? Its c44e:ac09:6a36.
Edit 3: I know see that the “black” usb port in the vero is severely broke (the one I tried to attach the drive to), I must have broke it years ago without knowing/recalling. I don’t know if that could have cause the bricking but I guess there’s not much else to do than ordering a new one.

The white port would be used for OTG (i.e. to check it on PC).
I believe your device is a Vero 4K, but it should say ‘Vero 4K’ or ‘Vero 4K +’ on the bottom of your device by the MAC address.

You say the USB port is broken – is it possible something is stuck in the device / shorting? If you leave the device powered for a couple of minutes, is it getting warm?

Well both says Vero 4K but the other one (working one) says 4plus in the settings (somewhere under system info), and I’m positive I have one 4k+ and one 4k. I found my ordering mail for both so that’s definitely true.
I used the white one for the test, there’s nothing stuck in the black on but the “black” part is missing…stupid not recalling that. Maybe I shorted it, “blew it”, when inserting the drive?
It does not get warm but there’s a low, low scratching sound, like a mechanical drive sound but very low. I guess I have broken it and its 5 year old so…maybe it should quietly go to vero heaven.

There was a small batch of 4K+ devices at the start where we used the 4K label because we didn’t want to delay deliveries. The System Information page will be accurate, and if it says 4K+ then your other device is indeed a 4K.

As the device is so old – there’s not much you could lose from opening it gently with a butter knife and seeing if there’s anything obstructing inside the device.

Maybe I shorted it, “blew it”, when inserting the drive?

If your NAS stopped working and then you plugged a hard drive from the NAS into another device and it died, I would think that their might be an electrical fault in the hard drive and I would be cautious about plugging that drive into anything else.

Yes, and if I hadn’t previously broke the usb port I totally agree with you.

I will admit defeat and when I get my new NAS up and running I will order a new shiny 4k+. Thanks guys for your help.

I opened it up and it looks ok apart from the usb port which looks in a right mess with connectors pointing the wrong way. I I mentioned I will admit defeat and I most likely caused this myself. Thanks for excellent attention.