What is the correct way to setup folder- and filenames (all *.MKV) for series so OSMC can scan for content automatically?

Currently I have following setup:
Folders: Name of serie + S** f.e. Lost S1 or Lost S01
Files: Number of episode + Title of episode f.e. 01 Pilot.mkv
Sometimes I only have the number of the episode as filename f.e. 01.mkv

If my setup isn’t the way to approach this, is there any way to automatically update folders and files, so they are compatible (f.e. with some batch file).

I then use Media Companion which then automatically gets the art and renames the files in the specific folders.

Kodi documentation has very good explanations of this:
http://kodi.wiki/view/Naming_video_files/TV_shows

please has someone some script for mass renaming of files? thanks

thanks men, looks good that app… and i should use it on windows machine to rename it on my NAS? or install it as a package on NAS and run it from there in terminal?

I use Bulk Rename Utility in Windows.

There is some effort and takes a couple of tries to get your head round it but it is awesome.

As for the naming convention I have mine in the following:-

Where XX is the number.

Personally, i dont have the series in the episode filename. You can see what series it belongs to by your folders.

But, the link above gives plenty of options to suit each individual’s taste

ok, i used the program for the renaming… now the issue is, that the library takes just first series (series 1), the another one series 2,3,… are not in my library… how to solve this? all episodes are in separate folder, it looks like:
series/series1folder/episodes01e01folder/episodes01e01.avi

I “found” this pic on the internet, it is very very very similar to my setup. 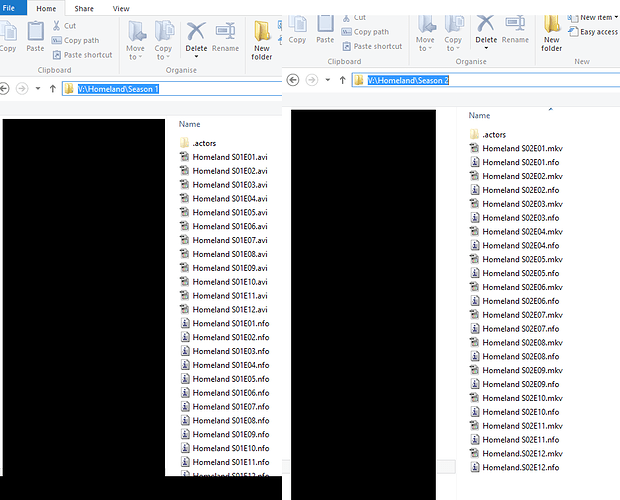 that is the convention I follow. I’ve got numerous shows, some with 10 seasons plus and never had a problem naming them this way

ok, thanks, so the episodes should be without episode name? just “series_nameS01E01”?

i will test it this week and let you know

You can absolutely put episode name if you wish, some of my seasons also have episode names like so:
show_name/season 1/s01e01 - Episode Name.mkv

I don’t even know why I bothered posting a picture.

bertoJun 20
Kodi documentation has very good explanations of this:
http://kodi.wiki/view/Naming_video_files/TV_shows25

as berto pointed out it is all made pretty plain here, can’t go wrong following this guide

so, i used a different plugin for my library and works great, also fanart is correct. so thanks you all for help