Windows 8 Installer Picked up as virus

Just wanted to say tried to download the installer. Firstly chrome decided to tell me the file could be dangerous as not many people have downloaded it, Which i pressed ignore and download anyway on, then Avast internet security 2015 decided to eat the file.

I’ve attached some images below 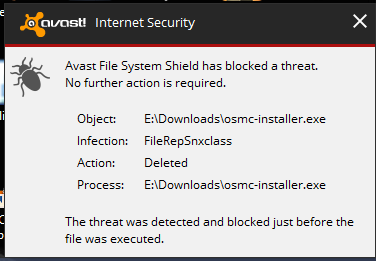 I’m not sure why Avast! has tripped that, but it’s a false positive. The only thing I can think of is that we use a self-extracting executable (WinRAR SFX) so that we can embed several files in one. This is similar behaviour to a ‘Binder’ or ‘Dropper’

Just to give you, and others, a bit of assurance, I uploaded the installer to Virus Total. The results are viewable here. It shows 1/54 which is a false positive.

I would appreciate it if anyone else with Avast! can confirm if they too are getting any warnings.

I had a message from Symantec as well, but I could ignore it luckely

Yea not sure why it’s showing up really, I’ll see if I can find its option to report a false positive. Not saying you’d have anything bad in it just wanted to bring it to your attention before some less tech savvy people panicked!

Thanks, if you can report it as a false positive for now

Yes I had chrome mark it as unknown. But i just ignored it and moved on. Didn’t have that issue with the earlier beta’s.

Avast blocked it for me as well and now I can’t find a way to unblock it.

I’ll keep looking but if anyone knows that would be very useful.
Cheers,
David

Edit: Sorted it, I had to disable shields and then download the file and re-enable shields.
Not a nice thing to have to do but I couldn’t find another way as I added the URL and file to exclusions which didn’t work.