Access to the console still useful when no other mean

(this is more like a how-to for improving console usability)

One of the Veros I bought is installed at my parent’s house with no other computer than the Vero itself. So, I have to use the Vero to transfer movies from my own hard drive to the other one permanently connected to the Vero. I could bring my laptop and connect that drive to it, but travelling with a tiny portable drive is far more convenient. I can’t SSH into their Vero either, since they’re not connected to the Internet. I know the transfer rate through Vero’s USB ports isn’t great (the Vero was not understandably design for that), but still decent and fair enough for transferring HD movies, documentaries, music, etc. I’m not in a hurry and starting an overnight file transfer to refill a whole drive is not a problem for me.

As a result, I decided to bring some comfort while in the console: 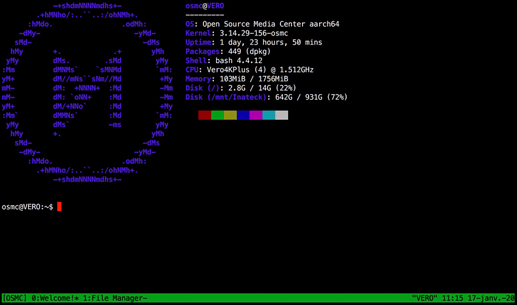