I’m having similar problems like the guy in this thread. But from the beginnig:

I’ve been using RaspBMC and now OSMC for quite some time. I had it installed on a Raspberry Pi 1 Model B and watched films and series from my homeserver which is running on FreeNAS. Data share is working via CIFS.

The database also lies on the server. I’m scraping from my mac, the Pi only does the playback.

On my Pi 1 everything (HD playback, surround sound) worked fine, but the menu was very slow. So i switched to a Pi3. Fresh Install, set up all the settings and the advancedsettings.xml, an on first sight everything seems fine.

First i thought, it was some power problem, because the red LED was blinking. Aftwr changing to another cable, the power seems OK and a benachmark (4 threads “yes > dev/null”) didn’t bring the LED to blinking. Power supply is an Apply USB power supply with 12 W.

Then i found the option wirh the hardware acceleration in the settings (MMAL and OMXplayer) and tested all possible settings, without effect.

My TV gives me the possibility of some kind of technical overly from OSMC (see screenshot), showing information about Video and Audio codecs, the CPUs and, i think, the buffering (second to last lone, after the “B”). The Buffer seems to start around 60%, then goes down to zero, the playback stops until its back to 99% and so on. Could this be my problem?

Whats funny is that the Pi 1 doesn’t show this behavior on the same network cable. Network goes as gigabit LAN into a switch ba Cisco.

I hope you can help me. 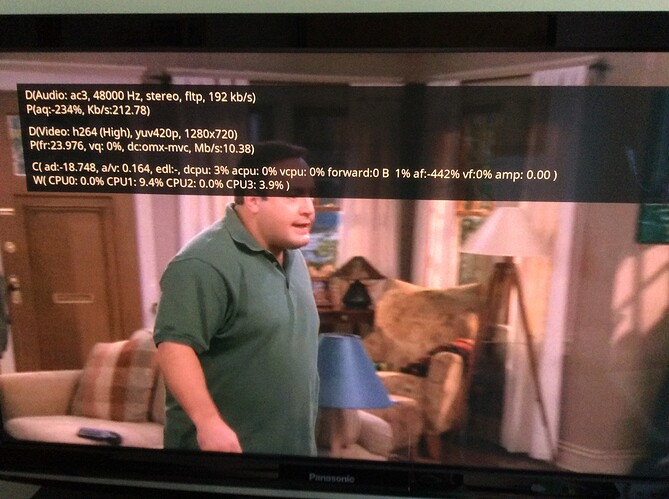 It would be good if we could find out more about the file you are having issues playing and to get a better understanding of the problem you are experiencing we need more information from you. Please see the mediainfo and logs section in How to submit a useful support request - General - OSMC .

logs man, we need to see the logs

So how I understood the process you just need this link:

Can you try putting a problematic video on a usb drive/stick and plug it directly in to the rpi3 and play it.

let us know what happens.

So from the stick its working perfectly well.

So the reason for my problem is the network? But with the Pi1 its working perfectly, only the performance in the menus is absolutely poor.

Can you try running some speed tests with iperf?

From the Pi via ssh? Or from my mac?

Edit: ok, just tried it from my mac and seems fairly complicated.

But: from my mac i get around 60MB/s downloadspeed from my server, so the network speed should not be the problem.

Do you mean Apple USB charger? I don’t think these are quite adequate

It’s one of the big ones which were shipped with the first ipads and are now only sold separately. And 12 W should be enough, should’nt they?

As I understood it, the Pi3 turns off its red light when the power drops. I had this issue in the beginning, bur by switching to another cable it seemed to be working fine. Red light is alwax on, even when pushing all 4 CPUs to 100% load.

Edit: alternatively, I can use my PS4, my Onkyo reciever or a MacBook Pro for powering it.

Edit: alternatively, I can use my PS4, my Onkyo reciever or a MacBook Pro for powering it.

None of these, including the iPad charger are sufficient.

The iPad can drop well below <5V under load.

OK, I will try with another power supply tomorrow morning. Thanks so far at everyone.

Can I also use a power supply with a coaxial power connector and power the Pi over the GPIO-Ports? That would make it a lot easyer, because I’m living in a somewhat small city and don’t think I can get a good USB Power Supply here…

Couldn’t it be somehow related to my problems with copy/transfer speeds which I’m experiencing with my RPi3? I’m suspecting the USB resp. USB driver…

Please don’t thread jack! This is a video playback issue. Yours is reported as a file transfer issue.

I will order the original Pi power supply, will take until wednesday or thursday. Will follow up