Hi all,
Just received my vero 4k+ today, plug it in and turned it on.
To my surprise, it was not working.
It’s stays in this screen, picture attached. 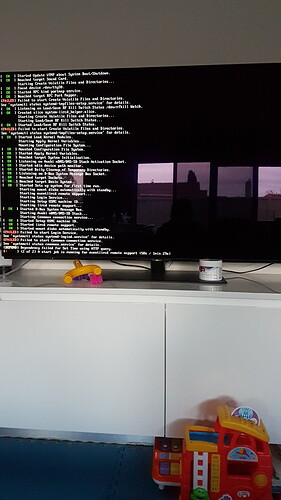 Yeah I had to do a a reinstall to fix exactly that issue . I had to do via SD card as USB would not work for me.

What’s your order number?
A reinstall will indeed resolve this

Im having issues with reinstalling

Put the sdcard in with osmc, restarted the unit.

Still stuck in the screen attached.

Then stopped in second screenshot.

The screenshot doesn’t seem to have been uploaded.

Can you re-upload it?

Did you use the windows installer to make the SD card , on the download page…that is what i used

Please take a screenshot of the contents of your SD card

I should also mention that when inserting the sdcard into the side of unit, i can hear the locking in sound but the sdcard appears to very loosely attached

Make sure you are inserting it correctly (logo side down; pins facing you).
You can also use a USB

It appears to be working now, rookie error

Glad to hear. Sorry for the initial inconvenience here.

All good, glad its working now.

It seems that maybe I have a similar problem. I have just received a Vero 4K+ but it is not booting completely; I cannot login and graphical interface does not start.

Setup: I connected the vero4k+ to a PC monitor using a HDMI-to-VGA adapter that works (I can see the console portion of the boot process); I took pictures with a camera and this is the summary of the error messages on the screen that seem relevant are:

#then these three errors are repeating multiple times:

…
#it then continues with :

#everything ends after ~ 2 minutes with:

What I have tried:

What I have not tried: to boot it from a stick/card. I am reluctant to do it, since I do not understand what the problem is. Should I ? I really appreciate some guidance.
Thanks.

Reinstalling OSMC will solve the problem for you.

This solved the issue. I installed the last version using an SD card.
Thank you for the quick reply.