Is there a way to cast Youtube (from Android phone) to OSMC? I looked at AllCast but that does not seem to work for YouTube

Well with Yatze https://play.google.com/store/apps/details?id=org.leetzone.android.yatsewidgetfree&hl=en (with the Stream Plugin) you can transfer the Youtube Stream to OSMC where it then locally is played.

Is there an equivalent on iOS ?

I have Yatse + Unlocker + Stream Plugin but I do not see the Stream Plugin from within the Yatse app. How would I stream Youtube to OSMC?

Maybe you have to clean your App Settings.
When I choose a Youtube link on my phone I get this Dialog and can choose to sent it to OSMC. 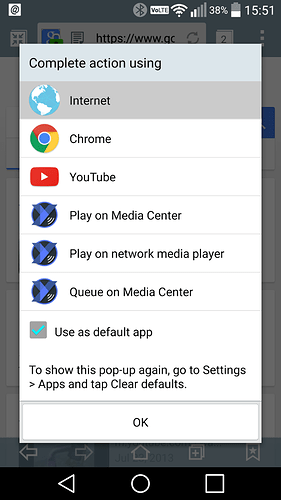 Or, when you are in the YouTube app on the phone, share to yatse is an option.

Is there an equivalent on iOS ?

Are you sure ? it doesnt work for me.
And last time you said the opposite… I’m confused now

Indeed. Kodi does not support mirroring at all and never has. To make video playback work at all with iOS 8 it was necessary for Kodi to advertise to the iOS device that it does support mirroring when in fact it does not. (Otherwise the iOS device will refuse to see it as a video capable device and you will only get audio) This causes the mirroring toggle to appear on the iOS device but you must not enable it or you will lose the connection and in fact you will find that the Airplay target will…

Are you sure ? it doesnt work for me.And last time you said the opposite… I’m confused now

Said the opposite to what ?

Ok, I didn’t know that mirroring is not mandatory to stream video.

Mirroring is exactly duplicating the screen so that you see any app and even the home screen. Kodi doesn’t support this.

AirPlay video is sending video from an app that is able to play video - the video is displayed full screen on Kodi but on the iOS device screen you will see only controls and not the actual video.

Apps that protect their video with DRM will not work with Kodi but most others (except the official YouTube app) will, for example I send video from Instacast.

Great Thanks ! I will try this.
(I made mirroring works once with Photos app)

Sorry I forgot to mention photo support - AirPlay does also support sending of still images without using mirroring, and Kodi does support this too - however I’m not aware of any apps besides the built in photos app that makes use of this feature.

There are 3 ways to do this on Android:

NOTE: you do NOT need the Yatse Unlocker. The free version works great and allows you to share to Kodi.

NOTE: using Share to Yatse/OSMC also works for audio and pictures!! Same for Miracast, using the default HTC Gallery app on Android, I can watch slideshow of my phones photos via Miracast.

Windows:
Windows 8 and Windows 10 laptops/tablets and perhaps also phones also support Miracast. I have not found a Yatse alternative on Windows. Hopefully Yatse will become a Universal app.

Kore is the official remote for Kodi, with a simple and easy to use interface...

Thanks. Any iOS alternative?

Yes, there is official app for iOS
https://itunes.apple.com/en/app/official-xbmc-remote/id520480364

Yes but I can’t cast youtube with that one right ?

Get Yatse or Kore from the Google play store. Then go to YouTube. Then go to the video you want to play and click the three vertical dots then share then click play on media. Only Yatse has Playlist support.
Hope this helps.