I never had (or never seen) high cpu usage, so:
I don’t know if what i will report is related to this bug.
Anyway, yesterday i noted a strange thing: when i start osmc, cpu usage in idle is around 15%. If i do nothing cpu stays at 15% for about 1 hour. After 1 hour, 1 hour and an half, cpu usage increase withouth doing anything. It starts around 30-40% and after two hours is more than 100% (i found after 2 hours oscillating between 100 and 200%), and vero 4k was really hot.

Nothing helped.
So i did a fresh reinstall of OSMC, with September update. I configured the minimum:

So i activated debug log in kodi, restarted, and left in idle for 1 hour and an half.
Exactly after 1 hour cpu usage increased around 30-40%. Now after 1 hour and 15minutes it’s around 135%.
This is replicable every time (i tried 10 times), after a cold start or restart, even only after restarting kodi (instead of Vero). Usally it begins after 1 hour.

And here i am, with results of “grab-logs -A”
https://paste.osmc.tv/etaloduqel
and two screenshots 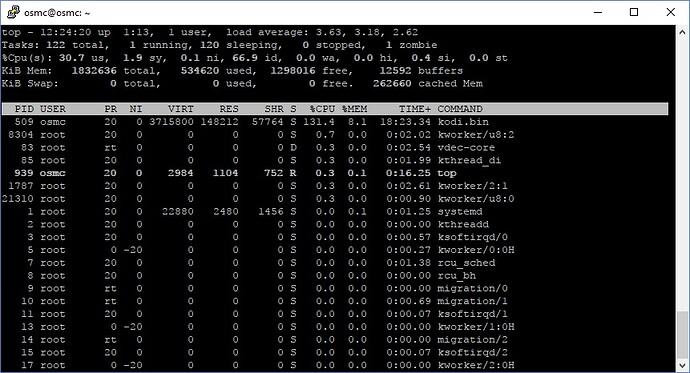 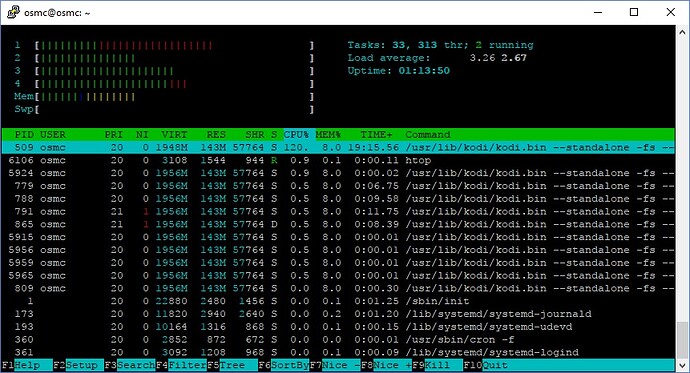 I add to previous message, maybe it helps others.

I found the culprit to my problem. It was my SMB share mounted in FSTAB.
As i disabled the mount, cpu stays idle for hours at ~15%. Also, i mounted SMB directly inside Kodi, instead of fstab, and even this time, 10 hours idle, cpu usage was ~15%. So for me it’s partially solved. I can use Kodi without any problems with smb mounted inside it, even if I’d have preferred to mount SMB outside Kodi in FSTAB.

Could you post what your fstab looks like? It’s very strange that mounting via fstab would create high CPU usage.

as i told, it create high usage after more than one hour of idle. But it repeat everytime, i tested more than 10 times, and everytime, after ~1 hour it start increase cpu usage.

I suspected of some options i choose could create problem:

I forgot to say that i’m on Vero 4K. I wrote on this topic because i found the bug similar.

as i told, it create high usage after more than one hour of idle. But it repeat everytime, i tested more than 10 times, and everytime, after ~1 hour it start increase cpu usage

Well as Kodi is creating the high CPU it would be strange.

Your last log was mainly showing activity after 45 minutes when Kodi addons started to update.
Suggest to add fstab again and upload logs as soon as CPU jumps up

My latest log was uploaded after cpu usage increased. 1 hour after Kodi started.

Kodi started at 11.11, Cpu increased usage at 12.11 and i grabbed log and uploaded.
I repeated this test more than 10 times and it’s always doing this.
I left kodi in idle, but it occurs even if i use kodi, 1 hour after Kodi start (restart too), it begin to use more cpu than needed, and i can check this leaving it idle and viewing in ssh, top and htop.

Well at 12:11 the only entry is OSMC update check so really not sure

I really don’t know what’s the cause.

I have moved the topic to a new thread as it clearly was not related to the topic discussed there. Let’s see how this progress over the time. I still have trouble to see relation with fstab based mounting.

Thank’s for creating a new topic.

As i reported in first post, i tried everything, even fresh install without installing nothing and without any change in any options. The only way to prevent cpu from high usage, and always starting after an hour, was to comment SMB mount in fstab. Without that high cpu usage disappeared.
If i uncomment smb (and remove smb mount from kodi obv), the “bug” appears again.
So, i don’t know why, but it must be related.
Maybe Kodi mount smb with other options, in another “way”.

I don’t know why, but… after october update i tried again to mount in fstab and i don’t have the “bug” anymore.

I was optimistic.
Problem appears again…

Then I would suspect that you have an add-on causing the problem. If this was a generic problem, I suspect that we’d be flooded with reports.

I’d suggest that you disable any add-ons that you’ve installed. If the problem clears up, enable them again, one at a time to help narrow down the problem one.

Obliouvsly i don’t have any addon installed and obliouvsly i already tested this and tested everything. I already isolate the problem. SMB mounted in fstab is the culprit.

If you ping me on Skype I’m happy to SSH in and have a look again.

If you ping me on Skype I’m happy to SSH in and have a look again.

Thank’s. I turned on my Vero and i’m waiting 'til it goes on high cpu usage. I also wrote to you on skype.

How is it going now?

How is it going now?

I made some test:

On first clean boot (no addons installed, only SMB mounted in FSTAB), the problem didn’t appear overnight (14 hours test).
So i tried one thing i usually do in my usage, stopped and restarted mediacenter from ssh (sudo systemctl stop mediacenter --> sudo systemctl start mediacenter). I usually do this with a script on my smartphone to fully close Kodi, and start it only when i want to use.
As i did this, problem occured again, exactly after 1 hour.
After 1 hour it start increasing cpu usage, initially around 30-50%, and after only few minutes it’s over 100-130%.

Thank’s to @sam_nazarko we have found the culprit.
It was a series of concurrent things:
SMB mounted by fstab, a DLNA server in my LAN and kodi that i use to restart, without restarting Vero.

These three, plus waiting an hour, were increasing my cpu usage.

Again thank’s to @sam_nazarko we’ve blocked traffic from that server and now cpu idle is on very low usage.