When you have installed Tvheadend from the Appstore, then go to Tvheadend “admin” interface by using this URL http://osmc.local.:9981 or http://OSMC_IP:9981 and login with osmc/osmc (can be changed later).

First be sure that Tvheadend can see your DVB tuner under “Configuration” → “DVB Inputs” → “TV adapters” should look something like this:

Same approach should work with HDhomerun network tuner with the new build
that includes tvhdhomerun (libhdhomerun)…but on OSMC startup, TVheadend
need the network to be working when Tvheadend starts if it does not show
your hdhomerun tuner, try these options:

regarding setting the hdhomerun the correct type network, you can change it like this:

Next go to Networks, and add your “cable network” ( i have yousee) chose DVB-C and edit accordingly to your provider…
Yousee is like this: 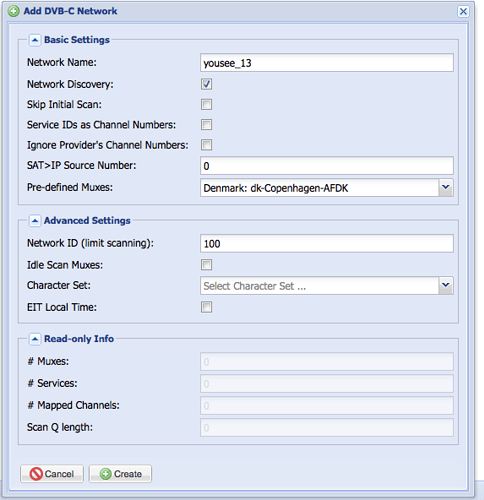 Network ID can important in Denmark my provider Yousee.dk is “100”, if DVB-T 0… can be dependent on where you live.

Now go back to “TV adapters”, chose your tuner hardware, in my case “phillips TDA…” click it. (see first image).

Chose your “network” you have just created, enable the tuner and click “Save”.

Now after a few minutes it should scan the DVB freq, you can follow what happens in the logs by enabling debug like this.

Click on it and will pop up an white area box, now click the little “gear” wheel that now appears beside it.

within a few minutes it should show something like this:

This part can take 30 minutes, after that go to “Services”, you should now see it populated with data like so:

Click “Map All”, and it will now check all channels. 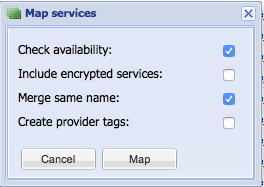 This part can also take 30 minutes, but you are now done. 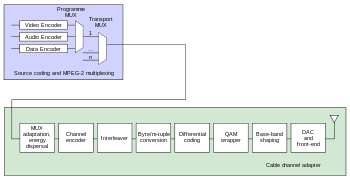 Digital Video Broadcasting - Cable (DVB-C) is the DVB European consortium standard for the broadcast transmission of digital television over cable. This system transmits an MPEG-2 or MPEG-4 family digital audio/digital video stream, using a QAM modulation with channel coding. The standard was first published by the ETSI in 1994, and subsequently became the most widely used transmission system for digital cable television in Europe, Asia and South America. It is deployed worldwide in systems ra Wi...

DVB-T, short for Digital Video Broadcasting — Terrestrial, is the DVB European-based consortium standard for the broadcast transmission of digital terrestrial television that was first published in 1997 and first broadcast in Singapore in February, 1998. This system transmits compressed digital audio, digital video and other data in an MPEG transport stream, using coded orthogonal frequency-division multiplexing (COFDM or OFDM) modulation. It is also the format widely use Rather than carrying ... 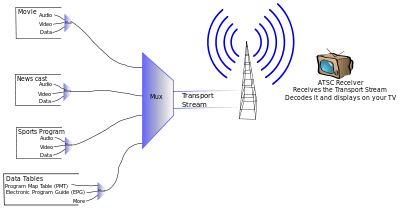 I will add another post later with how you can add icons to channels and clean up tvheadend.