Vero4k is displaying a lot of green screens at random. Mostly just after the command to play media, but it can also happen at random after booting or even after playing something and returning to the menu. CPU temps, CPU loads are normal (Around 60C, 10% utilisation). The Vero is still accessible on the network, so obviously not completely frozen.

I now have to reboot the machine almost every day, sometimes even multiple times after each other.

Attached log. Here it happened after twice trying to replicate the issue by playing a file. The green screen appeared AFTER I choose to stop the playback of the file.

Can you take a photo so we can see? 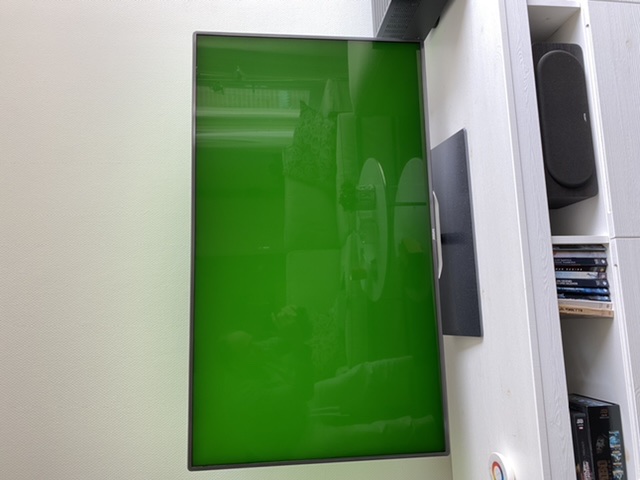 Good to know the device still responds via SSH.
Does unplugging the HDMI cable and plugging it back in help?

Do you have the issue if you bypass your AVR?

Unplugging and plugging back in the Hdmi cable does indeed remove the green screen. I’m connected via the AVR. This setup however has never changed in any way since I’m using the Vero. Taking the AVR out to test will be difficult because my TV can’t take my content directly due to Unsupported video or audio formats.

Another thing I just found out, weirdly enough it never occurred to me to test before, but I can actually stop the playback and try again without removing any cables or rebooting.

Taking the AVR out to test will be difficult because my TV can’t take my content directly due to Unsupported video or audio formats.

Why can’t you just temporarily change your audio settings and plug your Vero directly into the TV? The logs you posted don’t seem to be giving any obvious clues to what is going on so bypassing the AVR is a good way to isolate exactly where the issue is occuring. If you have another set of HDMI cables laying around you might try swapping those out as well.

A lot of my content won’t play directly to the TV unless I disable passthru. Quite a hassle, but I will try to run some tests directly to the TV with a different HDMI cable. Is it useful to turn on debug logging again or was there nothing to see?

You had rebooted after reproducing the green screens so the only thing to see was your old Kodi log and that didn’t look out of the ordinary. At this point instead of trying to find a clue in the logs it is recommended you just try to narrow down exactly when it does or does not happen to try to narrow down the possibilities of what could be causing this behavior. If it happens with a different cable directly to the TV then that rules out those cables and AVR for example. That would then tell you it is probably either the TV or the Vero. If you then plug the Vero into another TV and the problem still persists then that narrows it down more.

Chiming in here as well
Ever since I upgraded my Vero 4K+ to the test v19 I’m having this issue as well.
I can still initiate a reboot from Yatse remote but playback did stop.

As this thread is over a year old, it makes sense to start a new post with some logs so we can look in to this for you

Was there ever a fix for this as see same behaviuor when seeking on latest beta update?

Yes - it should be fixed for some time now. I’d suggest some logs if you still have a problem

I am still experiencing this problem as well.
In my case the screen is only getting a green “overlay” tho, as if one of the RGB colors were missing . Not sure how to describe this in english

This happens if i leave the device unused (over night or longer hours during the day), so no playback just kodi menu being displayed.

The Vero4K stays completely responsive and replugging hdmi or changing the resolution from 1080p to anything else (and back) fixes the issue.

This first happend a month or two ago and since then there were multiple osmc updates which i thought fixed the issue but then the next day waking the device from sleep it shows up again.

I am using a 2015 OLED TV and i have enabled the option to disable the HDMI output when the device is inactive (so the tv wont receive a signal and turns of automatically after a few minutes).
The Vero is plugged directly into the TV, no other devices like an AVR sits between them.

Didn’t have the time yet to investigate this further but i will try to produce some logs the next time it happens.

the screen is only getting a green “overlay” tho, as if one of the RGB colors were missing .

As this seems to happen randomly i didn’t capture anything yet.
Is Kodi Debug Logging necessary for capturing relevant logs for this? This would make this easier because my wife wouldn’t be bother by the debug OSD

You can have debug without OSD by adding
<loglevel>1</loglevel>
to
.kodi/userdata/advancedsettings.xml

But since i configured this the issue didn’t occur anymore

logs for my green screens on vero 4k+ here. Occurs when I skip through files. On bullseye:
https://paste.osmc.tv/riyimotewo