You need removable media to reinstall OSMC on Vero 4K.
Running that command on your device will likely brick it.

I decided to gut my Raspberry Pi temporarily and use the SD card. But I feel like a total n00b at the moment, because I can’t seem to insert an SD card properly into the device. When I insert it I feel a bit of resistance (the typical springy feel you get when inserting a card into a reader), but I can still just pull the card out, it doesn’t seem to be mounted properly and is very loose.

I’m inserting a SanDisk Ultra into the top slot right of the second USB entry (there are two smaller slits beneath what I believe to be the SD card reader). I’m trying to insert the SD card as pictured here: 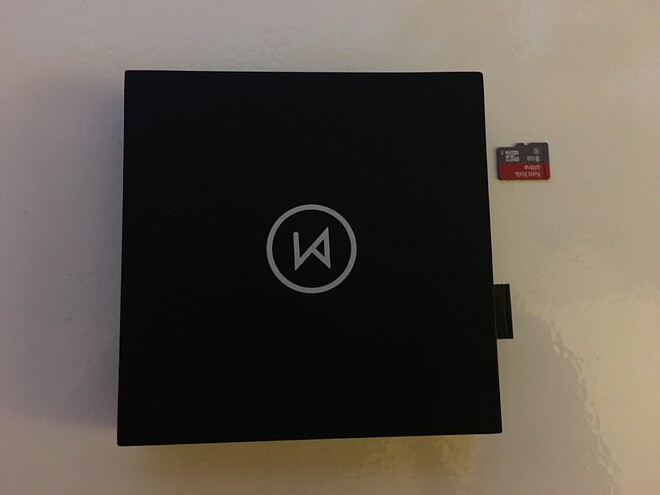 The socket on the 4K is upside down. Flip your SD card over and try again.

Will I be able to pull the card out again? It seem to disappear into the device and I need to use small pliers to remove the card.

It’s a push in to lock/unlock style socket, so once inserted you push it in again to pop it out.

But I feel like a total n00b at the moment, because I can’t seem to insert an SD card properly into the device

It’s a push push slot, so you can use a fingernail to push in and it will come out.

Quite a few people make the mistake, so no biggee

[quote=“bmillham, post:53, topic:37483, full:true”]
It’s a push in to lock/unlock style socket, so once inserted you push it in again to pop it out.
[/quote]It was a bit finicky, but I managed to insert the SD card as directed and do a reinstall. Thanks!

[/quote]I was a bit hesitant at first, because you have to stick the card all the way in. Prying a small card from the Vero would have been a bit of a nightmare. But yay for push slots.

So now I’m running OSMC May 2017 (2017.05-2). Just had a green flash again and entered echo 1 > /sys/class/amhdmitx/amhdmitx0/output_rgb in /etc/rc.local. After rebooting and watching a video for the past hour I haven’t seen a flash since. So probably not a hardware issue?

So probably not a hardware issue?

Correct. If it works fine now – it’s software related. I’ll see what can be done

Any news on how to prevent this saturation? Since August update I have no output_rbg file, is that correct? filing attr with rgb,8bit doesnt help either.

Hi – it’s being worked on. Unfortunately the issue with Philips TVs reporting the wrong colour space isn’t fixed in the latest version but does work as expected with older ones

I’ve downgraded to the May version of OSMC and won’t update for the time being. Of course downgrading isn’t a trivial procedure (it’s a complete reinstall so you’ll have to backup your Kodi settings, etc.), but that’s the only way to get rid of the saturation issues for now.

Hopefully the OSMC team will find a solution in a future update.

Did you try the HDR improvements in early July. I don’t think anyone experienced problems with saturation then, but they should have, if it’s present now

I’m always fairly up to date with the new releases, or was this an intermediate update? During the last update (the one where the output_rgb command was removed) the saturation issues started occurring. So that’s the early august release (July update), I didn’t notice any issues with the June update, but at that time, the output_rgb command was already present in /etc/rc.local/.

The HDR improvements were released for public testing but not part of an update for a few weeks beforehand.

I suspect if you’d tested these improvement you’d also have found the problem, albeit a bit earlier. I just wanted to confirm that was the case.

Downgraded to July update. It still has the output_rgb setting and everthing is fine again. Will wait with updating until a solution is found(or i buy new tv :P). I am sure the pro developers will find some sort of a solution. In all honesty Philips should update it’s firmware tho, because i understand the problem lays there. Thanks Sam and Mensch for feedback.

Would you be happy to test a solution? It may not necessarily work and
require a downgrade again which would be a pain; but I would like to get
this resolved.

I think the Phillips TVs that are affected are quite old, so I think the firmware
updates are unlikely.

I would be willing to test, even if it means downgrading again. The process of getting the box up and running again is a bit of hassle, but if it means the problem will be fixed I’m not that concerned.

The last firmware update for my Philips model is from 2010, so I think it’s highly unlikely that there’s new software in the works at Philips.

Okay – stay tuned. The issue seems to be caused by changes in the new kernel that refine the HDR-10 support.

I had to borrow an SD-card for the downgrade. So i rather not downgrade again.

Should august update solve this issue? Is it the force hdmi video mode over TV EDID one?