back to slow mode

Please don’t confuse… “Normal” settings will actually be faster than what you had previously configured. 1000 < 1200

So normal settings will utilize upto 1400 ?

Ohh ! So the turbo was for the old Pi-2. So know one has updated the turbo for pi-3

Nope still crashing using normal settings and I have no addons
https://paste.osmc.tv/kikonemaru

You’re getting an out-of-memory error that seems to be because of Kodi using too much memory. On a new installation, without add-ons, that should not happen. If this isn’t a completely fresh installation, you might have some Kodi settings causing the error. You can test if this is the case with:

If that doesn’t help, I’d recommend you reinstall OSMC and see if the problem persists before you make any changes.

I was getting this on my other Kodi Raspberry’s and always thought it was the addons causing them. So never posted about it. So I did a fresh install with only my massive library and my DVR addon and Kodi still unstable. So yes I did that with one caveat using turbo mode and turned that off and still having the same problem

So I did a fresh install with only my massive library and my DVR addon and Kodi still unstable.

Well, that’s not quite sticking to the spirit of “see if the problem persists before you make any changes”. To debug a problem like this, you realy need to take baby steps: first clean install with only the basic install-wizard configuration, then let it run for a while without doing any further changes, then add video sources and see how it goes. I’m sure you get the idea.

You might be hitting some memory limits because of your “massive library”. Care to share some figures?

Since you have more than one system, why don’t you setup a shared MySQL database? For a library that size it may be more memory efficient. Also, if you have a NAS you could host the database on that, decreasing the memory load even more.

Yes library is on NAS using 6 Raspberry’s for Cable TV boxes. The MySQL database is way above my pay grade for knowing how to set that up ! So your saying each Raspberry you dont scan in the library as normal ?

You don’t say what the NAS is. To install a MySQL server (now MariaDB on Debian stretch), the following instructions should be a reasonable template for most *nix systems.

I’ve been trying to follow the guide and and it seems things have changed meanwhile a bit… So the steps I needed to take as of 13th January 2018 on OSMC 17.6 with a Debian Stretch fork: Install MySQL (MariaDB in fact as replacement of MySQL) sudo apt-get install mysql-server confirm the extra packages and wait the installation to complete Login the DB sudo mysql Create DB user create user 'osmc' identified by 'osmc'; Give grants grant all on *.* to 'osmc'; Reload privs flush privileg…

The client configuration is detailed at the top of the thread.

I was looking at a youtube video about mysql setup and it still shows importanting the library in. The feature of watching a video in one room and finishing it in another isnt important to me. I am confused how its going to free up memory on the Raspberry if you still have to scan the library back in.

I might be wrong but such a NAS doesn’t look too promising as a MySQL server.

I think we need a different strategy. I’d suggest that you try to split the scan into several parts, which will depend a lot on the directory structure you’ve created on the NAS. For example, you could try adding just movies first as a data source and see if you manage to get through the scan. Then try TV Shows.

If nothing works, I might be forced to recommend a Vero4K, since that has 1.7GB of usable RAM.

That probably would not do good with MySQL. Do you have another (like Windows) system that could host a MySQL library? The reason a MySQL database can help is that the queries get offloaded to the MySQL server, instead of the client Pis.

For scanning new content, you do that from one system (doesn’t matter which one, it could even be a Windows box). Then all the Pi’s will see the updates.

OK here is my setup I have Windows 7 pro running 24/7 on a i7-2700 CPU 3.50 GHz with 16 gigs of ram with HDhomerun with 6 tuners recording and then sent to MCEbuddy which in return moves it to the WD Mycloud which I have 16 TBs on it. All hooked up to the Raspberrys with 1000/100 network. They all have the library scanned in with no trouble. So question is do the Raspberry’s running out of RAM ? to handle the Library ? Or do I have this setup wrong ?

They all have the library scanned in with no trouble.

Clearly I misread the situation, since I thought OSMC was failing during the initial scan.

If it’s failing when querying the (local) database on the Pi, it definitely suggests that offloading all the database work to a central MySQL server would be the way forward. The obvious place to host the database would be on your 24/7 Windows 7 box. And yes, MariaDB / MySQL run on Windows 7, though I’ve not installed either myself on any version of Windows.

Well scanned my NAS to see how many TVshow I have ! WOW It really shocked me ! Over 36000 episodes 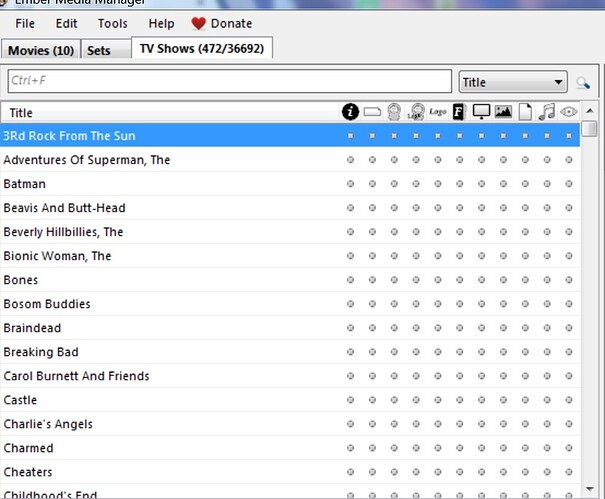 Kodi’s database code is a bit “sub-optimal” at the best of times, so I’m not surprised it crashed-out on a Pi.

Assuming each show is on average 30 minutes long, that’s 18,000 hours of viewing. It would take you more than 2 years of 24/7 viewing to see them all. That’s without sleeping or any “comfort” breaks.