It’s the first episode of “Altered Carbon” encoded from an 4K Source to 1080p with high bitrates i try to play it via USB and via SDCard and both times the Raspberry Pi 3 stuttering at the water scene, seems like the GPU cannot handle that many pixels at once.

I tried the same file on my BluRay Player and its working over USB also it worked on the new FireTV Stick 4K.

Can someone play this file with the Raspberry Pi 3? i tried everything with advancedsettings etc it seems like i don’t get it to run smoothly.

Here is a picture of bitrate from the whole file:

Strange is that the log file shows no error at all.

I suggest uploading test clip to somewhere else, as when I click download I am presented with deceptive site a head message.

Mediainfo would be good as well.

new links (hope one of them is working):
https://ufile.io/misu4

Mediainfo (of the whole file):

Pastebin.com is the number one paste tool since 2002. Pastebin is a website where you can store text online for a set period of time.

This file won’t be playable on Raspberry Pi. The bitrate is too high and it is out of spec.

i thought so because i tried everything. So whats the problem? GPU to slow?

The VPU does not support such high bitrates.

Any documentation whats the maximum bitrate of the VPU?

40Mbps is the maximum spec of Blu-ray (with H264 encoding); so I’d imagine the VPU is specced with that in mind.

The Vero 4K + can play HEVC without issue; as well as higher bitrates.

It doesn’t make much sense to have 1080p H264 content at such a high bitrate however.

hmm some of my bluray untouched mkvs have 70 mbits and they work (ok its only a short time) seems like there is the maximum.

The Vero will make sense if you watch HEVC or 10-bit content.

Yeah but bluray (untouched ones) have peaks up to 70 Mbps

“To Live and Die in L.A.” is such a bluray the new remastered version has peaks at 70 Mbps (at the beginning) and the rasperry pi 3 is playing it fine over the network.

Yeah i dont watch HEVC and not 10 bit content was just an old file of my collection.

“To Live and Die in L.A.” is such a bluray the new remastered version has peaks at 70 Mbps (at the beginning) and the rasperry pi 3 is playing it fine over the network.

Is this a 1080p or UHD release you’re ripping?
The Pi will tolerate some higher H264 bitrates; but I’d be surprised if bitrates have increased so significantly, as it’s likely they’d have broken players in the process.

normal 1080p BluRay, its only for 1-2 seconds dont know why was surprised too they are more blurays with such high peak bitrates (in the past it was common on VC1 content).

Seems like the Pi can do some amount of bitrate for a short period.

Iam not sure if the UK BluRay is identical to my BluRay but it seems so. Yeah i know the specs but the BluRay labels seems to not care about that. I saw an documentation about it were you can get the peaks to 70 Mbps that would be “ok” for 1 second or something.

Was quiet surprised about that

This one apparently has a 40000 kbps bit rate, but it can’t be played on all blu ray players because of this.

BTW, these are only video bit rates, you can look up the audio…"

seems like its a common thing.
" The specs say that max video bitrate is 40Mbps & max data transfer rate is 54Mbps…"

Thats Video 40 Mbps and Audio 14 Mbps, so i suspect they peaked it out. Because i know that the “To Live and Die in L.A.” is not playing on my bluray player (the disc is playing but at some point it comes an error).

"The specs changed - Profile 1.1/2.0 has a higher total rate than profile 1.0 does.
Always best to keep to profile 1.0 specs though to minimize returns "

Unless this has changed, the Blu-ray spec seems to limit 1080p video to 40Mbps. VC-1 is also capped at 40Mbps. 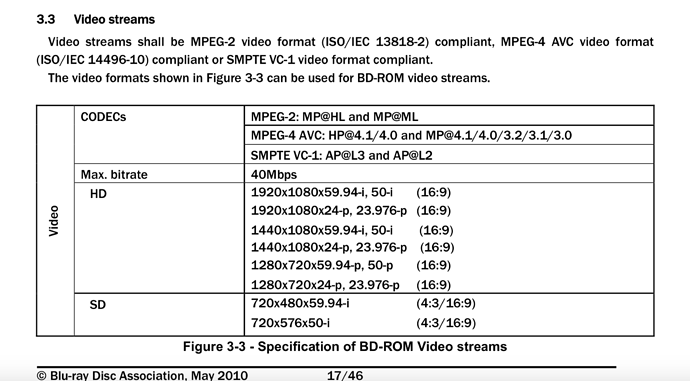 I suspect that this is to guarantee backward compatibility with older players.

Maybe i reencode my sample file to a lower bitrate to see how much the Pi 3 can do until it stutters, that would be interesting. What i know is that i played some old AVC with 70 Mbits and it worked (didn’t change anything at advancedsettings).

Unless this has changed, the Blu-ray spec seems to limit 1080p video to 40Mbps. VC-1 is also capped at 40Mbps.

Maybe i reencode my sample file to a lower bitrate to see how much the Pi 3 can do until it stutters, that would be interesting. What i know is that i played some old AVC with 70 Mbits and it worked (didn’t change anything at advancedsettings).

So i did some tests and the results are:

So the Raspberry Pi 3 CPU/GPU can play a bitrate with 95,57 Mbit (Video/Audio combined). I tested it both with USB 2.0 and over LAN and it was the same it stutters at 96 Mbit.

So i’m pretty surprised because it has only 100 Mbit Ethernet and 95,57 Mbit is an extremly good result.