I’ve been testing the beta version of osmc on a raspberry pi 4 (OSMC_TGT_rbp4_20210414).
Ignoring already known bugs, it runs great as usual.

I am trying to move existing installation (or install a new one) on the usb-ssd drive connected to the raspberry and boot from there but with no success. The case is an argon one m.2 and raspberry has been configured to boot from usb. the disk gets detected as sda.

Anybody managed to do it, or know if i 'm missing something?

USB only boot isn’t supported at this time, but you could have an SD with bootloader files and USB boot that way (already supported by OSMC installer)

Thank you for your reply Sam.
Congratulations on osmc btw.

Tried it via the osmc installer (selecting local build) but it eventually left the ssd intact and installed the operating system (/boot and /) on the SD.

It could be the image or maybe I should have deleted the empty /dev/sda1 partition already existing on the m.2 ssd or the disk didnt activate fast enough for initrd to detect.

Will try again later and let you know!

I’ve the same problem. OSMC will only be on the sd card, nothing is written on the USB-drive.

Did the preseed.cfg file get generated?

there is a preseed.cfg file on the sd card, if you mean that. 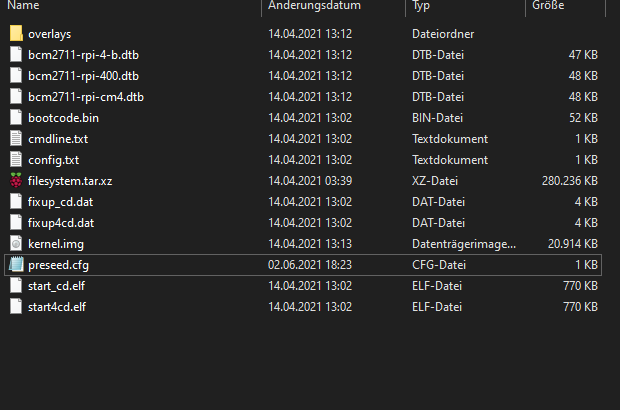 Thanks for that. It will be fixed in the next image.

[installer] [target] RBP4: Ensure that we set /dev/sda1 as root partition if USB storage is selected

Hi.
If I understand right, the testing image linked in the post here (OSMC_TGT_rbp4_20210414.tar.gz) is not yet the image with the fix, is that correct? I just tried installing it and got the same behaviour as the original post. I see there is a changelog in that post but am not sure if the image includes those changes.

Should the fix be included in the August '21 release? I still get “Install failed: could not mount bootfs” when trying to install the new image on my RPi4. I put the image on my USB attached m.2 SSD using the Raspberry Pi Imager, as the m.2 ssd did not show up in the listing with the OSMC Windows installer.

Yes - this is fixed. You still need an SD card for booting.

You should write the image to SD and boot with USB attached.

“Yes - this is fixed” Is it? Unable to boot from an image written to the SSD when a Pi4 is SSD boot enabled does not sound fixed to me.

Do you know if a future release is likely to have full boot from SSD working?

I have been waiting ages for the Pi4 version to be available so waiting for a properly working version is preferable to booting from SD card.

As Sam wrote, you still need to boot from an SD card, ie the /boot partition must be on the SD card.

Do you know if a future release is likely to have full boot from SSD working?

I’m happy to accept a PR on this.

Using PINN I can install and boot OSMC with no SD card installed in my Pi 4.

WIth the autoboot.txt option set, it will then boot directly as if OSMC is the only OS on the drive.

EDIT: I have also tried copying a working SD copy of OSMC with rpi-clone. However, it fails on boot as it is looking for root on /dev/mmcblkp02.

That’s because we need support for UUID label booting in the initramfs. Then we could support USB only boot.