We’ve been following some of the feedback and requests in an effort to improve the OSMC skin experience.

Soon, we will begin work on updating the skin so that it is compatible for Kodi v18 (Leia), which has now reached alpha status. Many thanks to @Chillbo and @NoDruid for working on these improvements and @grahamh for testing.

To install the skin:

What cool enhancements of the OSMC skin, fantastic job!
Thx to @Chillbo, @NoDruid and @grahamh.

Hi guys, thanks for the effort that went into the skin improvements. They are much appreciated.

I have one question with regards - replace “Aired on” in details of TV show episodes (in list view) by translatable “First air date”.

Or am I missing something? Should they not be the same date?

Are you seeing this in the library or in files view?

It’s file view I use , library view is displaying correctly.

Is it uncommon that I navigate exclusively using file view? I never got into the habit of looking at my library using movies/tv shows option. I find file view much more accurate, as library view often displays duplicate entries or deleted movies/tv series.

Is it uncommon that I navigate exclusively using file view?

This is typically a naming problem resulting in duplicates. You shouldn’t have issues with deleted items but are happy to assist in sorting that issue.

Still at a loss as to why dates would be, in my opinion, incorrect on file view as compared to library view,where they are ok.

Thanks for the offer of help. Probably not something we should start on this thread, do you think. I have used library clean which helps.

Can confirm this bug:
In TV Shows -> Files -> … the First Aired time shows the file’s mtime instead of the first date the episode was broadcasted.

@Brozzie Thx for let us know.

Quick question as I’m not near a Vero or PC: What would’ve been shown before? Just a different date with the “first aired” label?

Thanks for bringing that bug to my attention! It has nothing to do with the translatable label, but I messed up the date label… Will be fixed!

Thanks. Glad to help.

Just curious what you think about the size of the used font in the textbox for the video plot, see the red frame in screenshot below 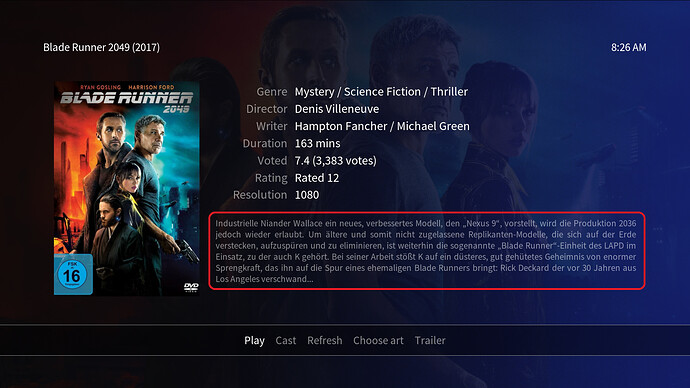 Hiya Wuschel, any update on a fix for this bug. Thanks.

@Brozzie As far as I can see it’s already in the OSMC March update included in the standard OSMC skin.

My bad, I was still on the dev skin after the update. Excellent work all involved, Many Thanks.

Just to be sure, is the behavior correct with the newest version, @Brozzie?

Yes, everything seems fine on first look, I will be using it a lot more over the weekend, so if anything pops up I’ll let you know. Thanks again for your work on this.