Hi, some time ago I tried to get a DVB-T USB dongle recognised in TVHeadend. There were some long threads, and eventually I gave up.

Can anyone recommend a DVB-T dongle that works well?

Also, I’m unclear as to whether the streams can be recorded using the PVR (scheduled also?).

Can anyone recommend a DVB-T dongle that works well?

Also, I’m unclear as to whether the streams can be recorded using the PVR (scheduled also?).

Yes, that is the primary function of tvheadend

Thank you for the recommendation.

I would still like to hear from someone who has actually got it working in HD using pi1, 2 or 3 as server, and can point to a USB device I can find on Amazon (so many seem to be under different names). Cheers.

I wonder if there is enough demand for us to warrant an official just-works OSMC DVB-T2 USB dongle for users. That would require a large minimal order and would be quite an outlay.

hi Sam, my guess is that a lot of regular users aren’t delving into this, as it as it seems a bit more difficult. a recommended tuner might help.

before I take a gamble, is there really no one out there who can recommend a dvb t2 usb tuner that definitely works in HD in osmc/tvheadend?

before I take a gamble, is there really no one out there who can recommend a dvb t2 usb tuner that definitely works in HD in osmc/tvheadend?

DVB-T: Afatech AF90015 is an old favourite of mine and is quite widely supported.

I’m sure others can weigh in.

I’m using Astrometa DVB-T2 usb stick and it’s working perfectly.
There was an issue with AAC audio. I needed to build tvheadend from master branch to make it work.

I have three different cheap tuners all based on the RTL2832u chipset There were some problems with this in previous kernel versions, however mine are all working with the latest kernel.

Hi all, thanks for the tips. Just to be clear - does anyone successfully get Freeview in HD? (using the Astrometa, or the RTL2832u for example). Is HD (Freeview) possible using TVheadend in OSMC? Andrew

I have 3 tuners running with TVHeadend:

Of course I can only get HD on the Astrometa and the Technisat.

Now it wasn’t plain sailing with the Astrometa, I had to recompile the linuxtv media tree with Antiis drivers. It looks like Ubuntu will have these drivers as part of the new 16.04 LTS release. However, I’m pretty sure you will have to compile them for Kodi on your Pi for some time to come!

But when it works it’s great - all the Freeview HD channels work no problem. Recording and playback too.

However, with OSMC on the Pi’s I have been getting audio synch problems since all releases after 2016.01. Sadly they have been getting worse not better with each update to OSMC and the last version 2016.04 is terrible. Audio and Video can be 10 seconds out of synch!! I think this is something to do with the HTS Client included with OSMC. I’ve upgraded TVHeadend on the server to the latest and the problem is still there.

This synch problem affects all tuners not just the DVB-T2. I’m going to make a seperate post on the issue but have been surprised nobody else seems to have reported it.

I use Technaxx S4 with dvb-usb-af9015.fw firmware on tvheadend Server. Works very well.

Some years ago I purchased the cheapest DVB-T from eBay, about £6
Search for RTL2832U R820T
It was a gamble!
It had a dongle, aerial , remote , CD
The CD had a windows program that had “DEMO” across the screen, rubbish.
The aerial was useless.
The remote worked.
So I put the lot in my top drawer.
Some while later I got a Raspberry Pi 2
Fished the dongle from my top drawer.
Plugged in and the Pi saw it, using lsusb. Plugged in a proper roof mounted aerial.
Installed TVheadend and that also worked out the box, bit fiddly to set up.
So I now have TV,Radio streamed around my home net, brilliant.
Jim

It was a long journey when I started a year ago, but my August DVB-T210 (Ver 2.0) now works fine on Pi2 with TVheadend. All the kernel modules and firmware files you need are now included in the latest OSMC distribution, I believe. The last time I did a clean install only two firmware files were missing but I think Sam’s fixed that. You need the hardware decoding licence for normal MPEG2 channels but HD is fine. And don’t expect an indoor aerial to work unless you can see the transmitter mast.

Just occasionally, if I leave a channel tuned in all night I wake up to a freeze, but I’ve no idea whether that’s the tuner or the Pi.

I am using simultaneously 3 pieces of CSL-USB-DVBT purchased at amazon.de
At the very early project, I used one of them directly at a Raspi1 B, 6 weeks or so. Was okay for recording, never used live TV with Raspi1. Later, I moved the DVB-T stick to an xubuntu 14.04 LTS (x86) nd increased the number of sticks to 3. Works quite good for recording, still not used live TV with (in between 3) Raspi1 B based kodi players.

Again later, I upgraded one player to Pi 2B and frequently I’m using the live TV now (SD resolution).

thanks everyone for the great response. I’ll have a look at this at the weekend when I have some time. will let you know if I have some success.,cheers. Andrew

Hi, The price seems good. Can you confirm this is the dongle you have? 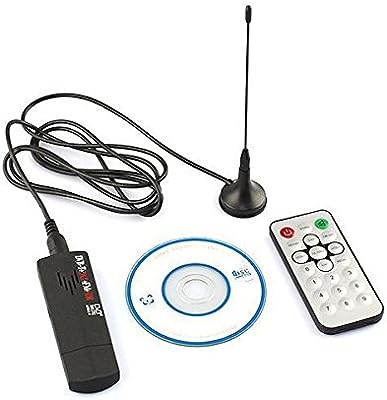 Can you tell me what do you mean with “bit fiddly to set up”. Do you have the procedure you followed for setup?
Can you also clarify how did you do this “So I now have TV,Radio streamed around my home net, brilliant”.
How do you stream them?
What about the input of antenna? Which type of input does it have? Can you post a photo?

Not that fiddly, just settings in tvheadend.
It’s a small coax see ebay pics
My client (pcs tablets etc) have XBMC which has a tvheadend PVR addon
Jim

Find many great new & used options and get the best deals for Cable Stick Adapter Antenna USB DVBT DVBT TV Tuner for Coaxial to MCX Antenna at the best online prices at eBay! Free delivery for many products!

Oh no, another cable no