I have all my data located on a Windows 10 box, and for years I’ve just been using a cifs mount via fstab successfully. Either OSMC or the Win10 box, or both updated and I can no longer mount via cifs. Turns out it’s because MS removed SMB1.0 recently, and a solution to that would be to add an option -o vers=2.0 (2.1,3.0), but whenever I try

Looks like this issue is due to a newer version of the cifs kernel module either not being built or just not available. I assume I could grab a module from raspbian, but I’m not certain that would work.

Is this someone has a fix for, or something that can be rolled out soon?

My understanding is we’ve supported this for some time, or we would
have had further reports.

If there’s a CONFIG_ option needed in the kernel, let me know and I’ll
get it added.

Is this someone has a fix for, or something that can be rolled out soon?

Which cifs module version do you have installed and which cifs-util version?

I’m away from the house now, but I’ll check when I get home tonight.

Looks like this issue is due to a newer version of the cifs kernel module either not being built or just not available.

Your module version is 2.9 which, according to LinuxCIFSKernel - SambaWiki was introduced with kernel 4.7, so it’s quite recent.

My feeling is that your problem might lie elsewhere. Unfortunately, error 22 seems to be quite generic in nature.

Nope, still a no go. I installed smbclient and tested with debug and received the error here.

More info about this here.

Can anyone else try mounting a share from a Windows 10 Pro box?

Well, turns out it’s a little issue on both sides. I’m running Windows 10 Insider prerelease 170624-1334 and from a post here someone states…

it seems that a recent update to windows 10 pro insider preview build 16232.rs_prerelease.170624-1334 included a change that required me to add vers=3.0 to mount a share that was previously working without it.

For whatever reason, the current cifs module built in osmc’s version of raspbian doesn’t support the ‘vers’ flag, so I can’t get around the fix regardless. I was able to successfully browse the server using smbclient //mintee-pc/Movies -m SMB3 after adding the following fields to my smb.conf in the [global] section

I’m over it, and ended up mounting the shares with sshfs.

Attached image was about the time I lost my mind, and quit for the evening. Enjoy the legit error message. 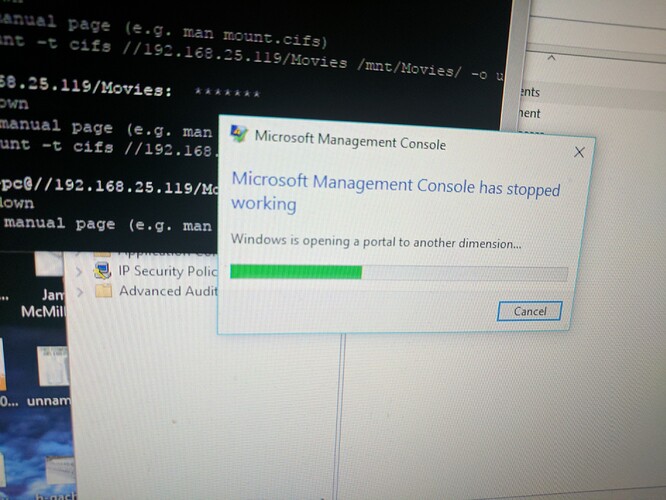 So changing Min and Max to SMB3 and then mounting via fstab doesn’t work?

Nope, not via the cifs module. Only smbclient. Odd, I know.

So it would be very helpful if the “vers” option would be supported as SMB1 should not be used anymore, e.g. for security and performance reasons.

So it would be very helpful if the “vers” option would be supported as SMB1 should not be used anymore, e.g. for security and performance reasons.

It’s being worked on. A potential test kernel might be available in the next 24 hours

I just ran a few quick tests and it seems that the “vers=” option is being parsed but the only value I’ve found that it will accept is “1.0”. Even “vers=1” returns error 22.

It’s being worked on. A potential test kernel might be available in the next 24 hours

@mintee @dillthedog, @sam_nazarko has put a kernel in staging that fixes the issue. If you want to test it follow these instructions otherwise it should most likely be published in the coming days.

Confirmed working for me! Great job all, that was quick!

Confirmed working for me! Great job all, that was quick!

Thanks for confirming.
Remember to change back the devel repository so that you are not being surprised with some future testing stuff. The current testing kernel will remain installed and just be replaced with the official fixed one during the next regular update.