Hi, today I received the last Vero2 that was in stock at Pi Supply.

Tonight I just unboxed it; connected Power, Ethernet and HDMI; updated to current release; and connected to the SMB share on my Synology NAS. I own a pile of DVD and Blu Ray ripped with MakeMKV that I serve from the Synology. These worked OK with WD TV Live but that’s an old box, so I was hoping for something newer and smarter (and something that’s still in security support).

Brief tests only so far, but the DVD MKV’s seem to play very smoothly indeed, as do most of the Blu Ray MKVs (e.g. Finding Dory, Skyfall, Breakfast At Tiffany’s, Cinema Paradiso, The King’s Speech, Ghandi, The Artist, The Blues Brothers, Toy Story 3).

The problem is that some of the Blu Ray MKV’s (e.g. Ocean’s Twelve and Thirteen; Mamma Mia, Happy Feet) play really badly: stutter in some cases severe and/or with picture breakup. Common factor so far seems to be VC1. Is that a known issue? Is there a setting that I’m likely to have cocked up to cause that problem?

Grateful for any pointers!

Thanks and kind regards

Can you give me a small sample to reproduce this issue?

I had a report of a problematic VC1 clip last night, so I’d like to look at this and address it.

Sure… It will be tomorrow now. I can upload the start of each faulty file to a private DropBox share and PM you the link (assuming the forum supports PM’s). How many MB do you want from each file?

Thanks for a lightning quick reply!

No filesize needed per se, but the smallest file that can reproduce a problem is great.

Link to private dropbox share should be in your email now.

4 MKV files going up there: 3 done, last one will be done in 3 minutes!

If the issue isn’t obvious when you play these, let me know and I’ll re-test with logging on as you suggest.

I have received the email and I am downloading the files now.

I haven’t had a chance to look extensively, but the video files themselves look suspect to me. For example, you remark:

Note that Oceans 13 has crazy vertical colour bars moving about by design on the opening (Warner Brothers?) logo for the first 50 seconds or so.

I actually see this on my laptop as well, playing the video on Dropbox website.

The Dropbox thumbnail (generated on Dropbox’s servers) also shows the red vertical banding, which suggests it may not be an issue with my laptop. 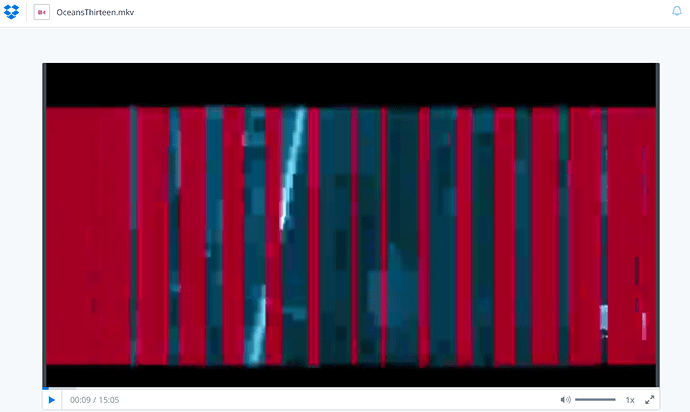 I’ll investigate the other clips soon (hopefully I get a chance this weekend), but something’s definitely off with Ocean’s Thirteen. If the other videos are sourced from the same place, I wouldn’t be surprised if something isn’t quite right.

You mention VLC and Kodi on PC can play the videos. Knowing how they are being decoded in these applications would be handy.

Can you press O in Kodi and print screen when playing back the VC1 files?

Some decoders are more resillient to defects than others. Software decoders behave a lot better than hardware ones.

It’s possible using something like mkvtoolnix to remux the video will help.

Hi. I think Oceans 13 is meant to be like that! The coloured banding is something to do with the gambling theme. It was the stuttering playback I was concerned about.

All of those files were produced on my Mac using MakeMKV from the genuine Blu Ray discs in my collection.

These are taken from the “apt-get” Kodi install on Ubuntu 16.04 on an HP Core i5 desktop. 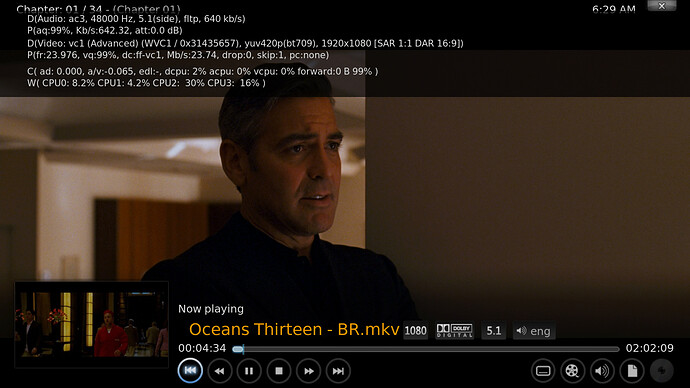 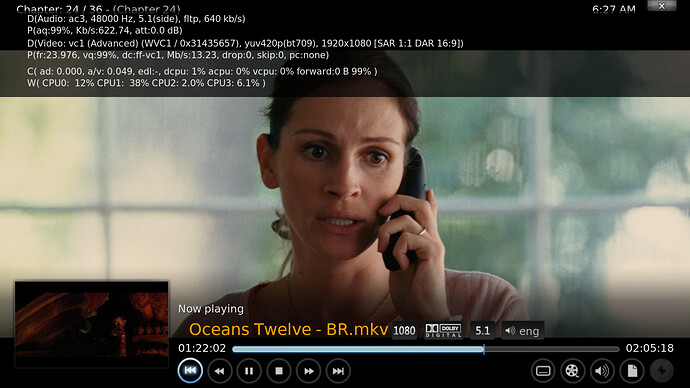 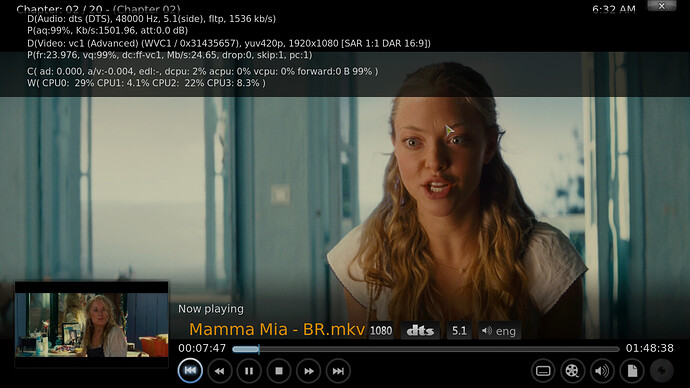 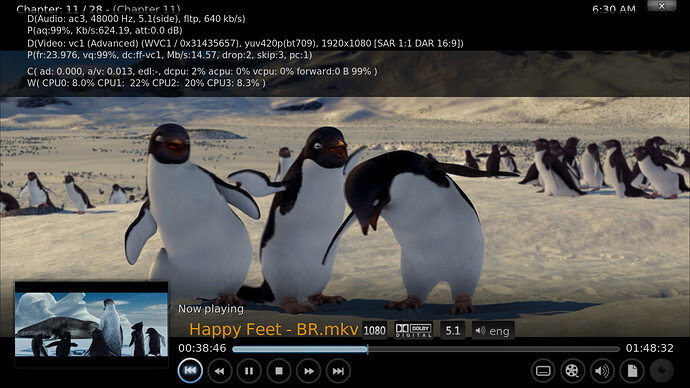 Thanks for uploading those screenshots for me and confirming you are able to play them back on your computer. I’ll take a look at the clips soon and offer some feedback.

There is sometimes an issue with VC1 content when playing back with framerate automation. If you change ‘Adjust Refresh Rate’ temporarily, does it improve things?

It turns out that Adjust Refresh Rate (Settings / Video / Playback in Advanced or Expert modes) was OFF by default. Turning it on seems to work: the TV briefly displayed ‘1080 24Hz’ when starting to play back one of those Blu Ray rips. I guess the TV might as well refresh at the same rate as the source material, seems sensible.

With Adjust Refresh Rate now enabled, all four of the problematic Blu Ray rip MKV’s play smoothly… All the jerky video stuttering is gome. Only issue is that now the picture and sound are a syllable or two adrift. Previously they were accurate enough that I didn’t notice. This is playing through the TV’s internal speakers via the HDMI.

I guess I can do more testing in time to see if there’s a fixed vide/audio offset, that I can then tweak in one of your settings pages, if it doesn’t depend on the source material. Or is there another setting somewhere that helps keep video/audio closer together?

Thanks for all your help! I guess I’m on a learning curve now.

I will enable Adjust Refresh Rate by default on future versions. It should be enabled by default and can definitely catch you out.

Only issue is that now the picture and sound are a good second or so adrift. Previously they were accurate enough that I didn’t notice. This is playing through the TV’s internal speakers via the HDMI.

I’m aware of some timing issues with some clips. Things are improved in Kodi Krypton (v17) which will land very soon.

Ping me after this version is released. It will be announced as a blog post and you will receive an update notification when it’s available. Let me know how if things improve.

I’ll let you know how that goes. I think I have auto update turned on, and I’ve subscribed to the newsletter.

Thanks for all your help. I am incredibly impressed with the OSMC/Vero2 experience so far!

This is just to follow up and let you know that there are some timing improvements for Vero 2 that should also improve VC1 playback.

Note that this is a Kodi Krypton build, so it is experimental. The final version of Kodi Krypton is expected to land in around one week’s time.

My files still play back OK, apart from that sound sync issue on those VC-1 BluRay MKV’s.

I haven’t taken those 2 files from DropBox - wasn’t sure if they would work with the last auto update, or how to revert back if necessary.

I have “adjust refresh rate” set to Always.

Still have the issue with audio/video being far enough out that lip sync is noticeably wrong. Saw mention of a hotfix related to the Vero2’s audio… Happy to try that if it might help. Is an auto update sufficient to pick that up, or do I need to do anything special? Sorry for Newbie questions!

Give the auto update a try, the initial upgrade to Krypton was horrific for myself and I started with upgraders remorse but it’s running better than Raspbmc / OSMC has ever ran, proper impressed.