The ‘input not supported’ issue just reoccurred (maybe of note, this was immediately after bringing the vero out of Suspend and beginning h265 playback, albeit with the external hdd powered on this time)

Same command immediately after reboot, playing back the same file (without the input error)

Notably the colour depth is reported as 8 bit (10bit when in error state), and Vid clock div is different

Notably the colour depth is reported as 8 bit (10bit when in error state), and Vid clock div is different

@retroresolution Can you try the latest update?

For the record, uname -a returns:

I’ll let you know how I fare with this version.

That’s the latest and greatest.

Firstly, let me wish you a Merry Christmas, and thank you for all your support this year (both Vero4K and otherwise related).

Nothing urgent, just thought you’d like to know I’ve been experiencing stuttering on 720 and 1080p playback of files on both encrypted and unencrypted partitions.

As is normal, here’s chapter and verse…

I recently installed Samba on the Vero, and had been using a Raspberry Pi 2 with an ALFA Network AWUS051NH V2 (Version 2) 2.4/ 5GHz Dual Band USB WiFi unit, with Detachable RP-SMA Antenna and Ralink RT3572 Chipset as the playback device.

I experienced frequent pauses / freezes, which may, or may not, be due to wifi issues (using 2.4ghz as I’ve at the time I had Kodi 17.3 installed, and was unable to switch to 5ghz. I’ve since installed the latest Osmc on the Pi 2, but performed no further testing, as I started experiencing random, severe stuttering on local playback for short periods on a range of x264 files. Some media seems bullet proof, others randomly falters.

As the drive holding the media is relatively new, and encrypted at partition level, I spent several days eliminating hardware failure (my drives are all mirrored, with identical hardware), via a full low level drive scan, and a full bitwise comparison of the files on primary and backup disks.

Tonight I was watching h265 media from an unencrypted drive, from a different manufacturer, and saw the exact same issue (albeit after several hours of flawless playback).

I’m wondering if Samba could have caused this, even when no external sources are accessing Vero’s shares.

All the best
RR

Good to hear from you
This might be one we need to pick apart as two different issues, as it seems you have issues with Raspberry Pi too.

If you can, I’d run some iperf or speed tests to check the network.
When you say you can’t connect to 5Ghz, can you elaborate?

You may need to use separate SSIDs, as Vero will pick the strongest signal (as per 802.11 spec); but 5Ghz may have a weaker signal but higher throughput.

Re. playback issue from USB: can you reproduce this; or is it rare?

Thanks for the reply, good to hear from you too.

I’m not concerned with the wifi issues - I’m confident that I can resolve all of these once the core system is achieving smooth playback once again, especially now I’ve ditched the custom Kodi-installed-on-Raspbian build, with manually implemented wifi, for a clean new Osmc image. For the record, the source media is from the same hard drives as used for local playback - just streamed.

Unfortunately the local usb hdd playback stuttering is only semi-reproducible, a.k.a the worst type of problem for any developer.

The system has exhibited the problem with the same drives on more than one occassion, and there are entire seasons of specific shows which seem immune, whereas others are prone to the issue.

I’ve not found a method to reproduce the stuttering, even using the same file. Time appears to be a factor, given that the system generally appears stable for several hours before the problem arises. Whilst it’s suggestive of a memory leak (my cheap Samsung tablet does this constantly with YouTube), nothing in Top suggested this was the case, however I did only investigate with bmon, Top, etc, when investigating the issue on wifi.

I could install dstat, however I’m warying of adding further variables into the mix.

When you get a stutter, you could try uploading logs quickly as it may reveal something

Hoping you’ve had a wonderful Christmas Day, if that’s your thing (otherwise, just a great day in general).

This is immediately after a c. 5 second stutter upon resuming from a brief pause (then skipping back using the left remote key a couple of times) on a 45 minute tv show.

Please don’t even consider investigation until after the holidays!

Hoping you’ve had a wonderful Christmas Day, if that’s your thing (otherwise, just a great day in general).

It looks like there’s a lack of throughput here.
Forget if I asked, but is CPU use high because of real-time decryption?

The files I’ve noticed the stuttering on recently are both x264 and h265, and low bandwidth compared to some movies I’ve got.

The final nail in that coffin is that it happened on a totally standard unencrypted drive (which finally prompted me to post about it).

(All above info taken during playback ofx264 media file from veracrypted partition, from one of the series apparently prone to stuttering).

Forgot to defrost? Your Christmas Turkey (or equivalent)? Nightmare.

Screengrab of Top during above tests 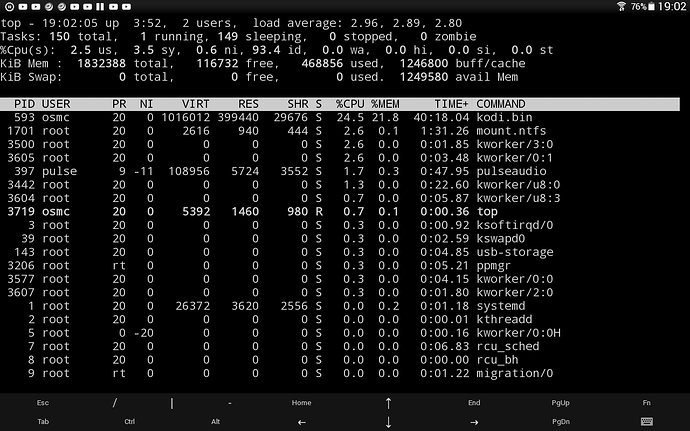 Another set of logs.

Stuttering begun less than a minute into playback from beginning of episode.

The stuttering is over too quickly to obtain any readings from Top or Dstat, unfortunately.

Do you have A2DP installed?

I was able to replicate the issue at the exact same point, but wasn’t expecting to, so didnt have an ssh session up. Of course it wouldn’t replicate a third time.

Yes, i installed a2dp for bluetooth a few weeks back, but not using it and completely forgot about it… hope your debugging sense is on the money!

[Edit]
I’ve removed the pairing which existed to my Anker Soundcore 2, and disabled Bluetooth, both via My OSMC, and rebooted for good measure.

In case it’s of any use, the thread where I got bluetooth audio working (partly via command line) is here:

Hi, Coincidentally I was just wondering about outputting audio from the Vero 4K to my Anker Soundcore 2 speaker, and found today’s thread. I’ve installed the a2dp package, and rebooted. In settings, audio output had been automatically changed to “Playback/recording through the Pulse audio sound server”. Unfortunately the Anker speaker isn’t making a connection, as shown by the device’s blue led continually flashing. I cannot locate any option to initiate pairing in the osmc settings. Rebooti…

My memory is so bad now, I forgot not only all about the work involved in setting it up, but that I had A2DP
installed at all.

I’ll report back with findings…

Seems your debugging skills are razor sharp as always @sam_nazarko; so far I’ve seen no issues since removing A2DP, which has also resolved a few gremlins which must have been related:

Many thanks for your excellent work; wishing you a great 2019.

Good stuff. A2DP is still very rough around the edges; and I do apologise for not noticing this before in your logs.

It should also please you (and @dastrix) to know that the range limiting option you requested will also be in the next update which should land tomorrow thanks to some excellent work by @grahamh.