Hi everyone, I was wondering if those that have installed OSMC on their beloved Apple TV 1 have seen any benefits compared to Crystalbuntu 2?

I am currently running x3 AppleTV’s with version 14.2 and wondering is it worth my while upgrading?
All my files are on a NAS and accessed over a gigabit network.

I have 2 ATV’s 1st Gen, one with CB2 and one with OSMC. CB2 is rock solid, and plays everything I throw at it. OSMC has got “niggles”, DVD playback is a matter of luck and even a high bitrate Bluray image is played by CB2 (with stuttering, it really is a testdisk and beyond the ATV’s capabilities, but CB2 is fighting it) and OSMC refuses to do anything with it.

My conclusion: stick with CB2, your ATV can’t be bettered with other software. OSMC is something to play with, but not the high quality you are used to experience with CB2.

it really is a testdisk and beyond the ATV’s capabilities, but CB2 is fighting it) and OSMC refuses to do anything with it.

Thanks for letting me know ‘pameijer’.
Once Sam sees your log files maybe he can sort out your problems and then i can make a more informed choice wether to upgrade or not. At the moment will keep to what i have as they are running well except for some high bitrate/7.1 files.

I would certainly recommend that. You can always try a USB install of OSMC on your ATV to see if all mediafiles play well in your house. It won’t be as snappy as a HDD install but at least you can go back to CB2 by just unplugging the USB stick.

@Sam, I don’t know when I will have the time to do so, but I will get back with my ATV-OSMC incompatibilities .

serdar13 I told you my own experience,

I had as you crystalbuntu 2 installed on my atv and it worked fine. Then I install OSMC on a USB stick and tested it, but the apple tv has USB 2.0 and the performance was slower than crystalbuntu hdd installed,

So I decided to try OSMC HDD install, and I realized that the performance is much better than crystalbuntu was. The only issue I have is that with a few movie files I have cuts on the audio but I’m sure that it could be fixed soon.

So I recomend you to try OSMC HDD release.

Hi guys, after a few months of trialling OSMC, i must say i miss Crystalbuntu on my ATV.

I have x4 ATV 1’s in the house and x1 has a HDD Crystalbuntu installed while the others have a HDD install of OSMC.

The problem I am encountering is that the ATV’s running OSMC is out performed by the one running Crystalbuntu. I cannot play any high bit rate movies without OSMC crashing and rebooting. Both ATV’s are on Gigabit networks with the only difference i can see is that Crystalbuntu 's audio is routed through an amp via optiacal while the OSMC is via hdmi to TV.

Here is my test and logs for someone to hopefully solve this:

The problem I am encountering is that the ATV’s running OSMC is out performed by the one running Crystalbuntu. I cannot play any high bit rate movies without OSMC crashing and rebooting. Both ATV’s are on Gigabit networks with the only difference i can see is that Crystalbuntu 's audio is routed through an amp via optiacal while the OSMC is via hdmi to TV.

The log is too brief to give clues. You should use our Pastebin, as it’s not really readable in this form.

I agree that CB will outperform OSMC. This is mainly because it runs a lower, less resource intensive version of Kodi. Back then, fewer people used add-ons for streaming and played back content locally.

However we haven’t had much testing and feedback for OSMC. As the hardware’s near 10 years old now, a lot of people have moved on to either Pi or Vero

Sam, I have tried the Pi too and that was the same and wouldnt play the files. How do i use the pastebin?

Sorry – thought it was performance rather related

If Pi won’t play it, may be a problematic clip.

You should see the Wiki on how to use the Pastebin

I have given you my logs to see what you can suggest. The movie is fine as plays fine on Crystalbuntu at 35Mb/s fine. Any help will be appreciated. 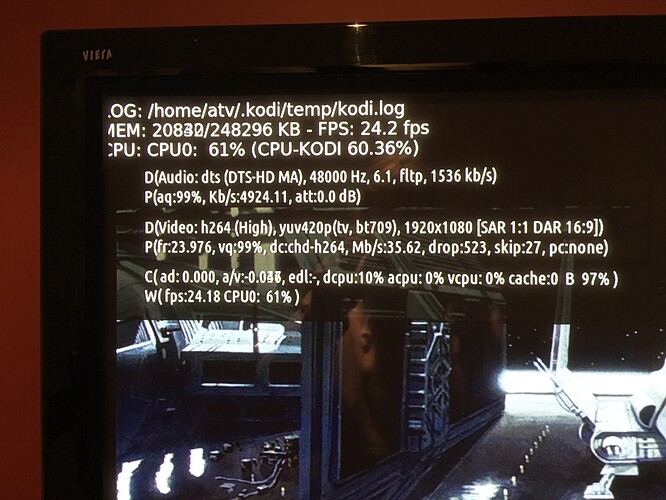 Still something wrong with the clip, as reported by ffmpeg on CB:

However it is acknowledged there are performance regressions with OSMC vs CB. This is mainly due to the newer version of Kodi; although I suspect newer NVIDIA drivers may also play a role in this, as I remember some older ones being better.

The fact is that the device is 10 years old. There is very little interest from users to provide much feedback, and with Kodi Krypton things will only get worse due to architectural changes. It’s getting to the point where the hardware has now become quite dated. I have supported it for as long as I can.

If you can provide a sample clip that can reproduce the issue I will try and replicate it here. However there is no guarantee that I can improve things. There are a lot of factors at play. Do you have a 70012 or 70015? Are you using the internal disk or USB stick?

Hi Sam, I realise the ATV1 is 10 years old now and you are focusing on the Vero and Pi rather than waste your time with out dated equipment. I would love to use OSMC on them but if not due to performance issues then it would be good to use Crystalbuntu as it meets my needs as I don’t require the latest version of Kodi and it’s new features.

All Apple Tv’s are utilising the internal HD’s and not running off USB stick. All connected via ethernet and all have 70015 cards.

Here is a snipet from original file you can test:

If OSMC will not enable me to stream my collection of movies from my Synology NAS, is it possible to clone the Crystalbuntu image from one atv to another?

I see a few threads that have asked similar questions and was wondering if the answers given were are still viable?

hi can anyone tell me how to copy crystalbuntu from one hard drive to another hard drive, thanks Phil.

I really appreciate what you have done Sam since day dot 1 and continued to support the Apple TV when others have given up. I know a day will come when I will have to update my ATV’s but in the meantime if Crystalbuntu works for me, it would be nice to carry on doing so for a little while longer.

If OSMC will not enable me to stream my collection of movies from my Synology NAS, is it possible to clone the Crystalbuntu image from one atv to another?

You can use dd to take a backup, or follow other recommendations yes.

In the interim I will try your clip and see if improvements can be made.