Hi Guys,
My Vero 2 arrived today and unfortunately it appears to be faulty. So far, it consistently crashes within one minute of start up irrespective of what I am doing at the time. This has made it impossible to get logs of each occurrence via the method you describe in your FAQ however I was able to obtain one via SSH (if the format is of any use to you). Sometimes i get the sad face however most times it is a blurred image (or red flashes) with a persistent buzzing sound and no user input works. I have tried it on two different TVs to ensure that it was not a HDMI issue on the host TV. I have also tried alternative HDMI cables.

I have reinstalled OSMC and the problem has persisted. No peripherals are attached to the Vero 2.

At this point I suspect a hardware issue and hope that you may be able to confirm this via the logs. The problem appears to be getting progressively worse and on my last start up attempt, the unit failed to boot entirely.

Can you upload a full set of logs?
Can you try a different display temporarily?
Can you describe the TV environment?
Can you try updating via the command line?

Can you upload a full set of logs?

Thanks for getting back to me so quickly Sam. I haven’t been able to SSH back in as it kept failing straight away at the startup screen (sad face). I then attempted to reinstall OSMC again. That was a bad idea. This fails as well (tar corruption ad the mid install point) after using multiple sd cards and re-downloading the image on a number of occasions.

So at the moment, the Vero will obviously not boot and I am unable to give you additional logs.

Can you record a quick video of this?

Is the power adapter plugged in to any extension cord?

After literally 20 attempts, I finally had a successful re-installation. The behavior that I described earlier is still continuing however I was able to get the below logs if they are of any help. I’ll send a video through shortly. The Vero is connected to a power board but I have also tried it on an straight wall connection in two separate locations. I should probably add that the TV’s that I have tried both run Rpi’s without any problems so I am fairly confident it is not a TV issue.

As requested, below is a link to the video. This is typical of what it has been doing since the initial startup. You should probably hear a buzzing sound. At that point, no further CEC inputs work nor does SSH on most occasions.

It does not look like your TV is to blame.

That does not look good. I will produce a kernel for you shortly to test your device and we can rule out a couple of things. Worst case scenario we will just have to replace it for you.

I appreciate your patience with the installer.

After leaving the Vero powered off overnight, on startup, it actually worked correctly for around five minutes. At the five minute mark, artifacts were introduced to the display. Around 30 seconds after that, the system crashed and continued in a power up/crash cycle.

The packaging arrived without any major signs of deformation. There is slight damage to the outer box but nothing that you would’t normally expect from international transit. The inner box showed no evidence of damage.

I am currently powering it directly from the wall and have used multiple power points to confirm that they are not at fault. The point I am using also runs a Rpi 2 without issue.

The device feels quite warm on the base after five minutes use. I don’t know if this is normal or not. There are no rattles when the unit is lightly shaken to indicate that something is broken internally

If this was any other device, with the symptoms that it presents, my immediate suspicion would be that it is overheating due to the progressively degrading nature of the failures the longer the device is powered on however I do not know enough about the Vero 2 to make a definitive assessment. Is there a way to test the temp within the system settings as you can with the Rpi?

Thank you for your help with this.

I’m facing the exact same problem. Mine does not stay up long enough to ssh into it. Just osmc logo and either the unhappy face, a menu that last only about 10 or 15 seconds before it either goes back to the unhappy face or it slightly distorts picture with a buzzing noise and jumble the image. Sometimes settling on a dark blue screen, light blue screen, or a gray screen, etc, etc.

The unit is rather cool. Not really warm or anything. Some heat comes out of the bottom but it’s not major.

And lightly shaking it, I do not hear any sounds of anything loose in the unit.

However whenever I replug the device into my magnavox tv, before the vero 2 boots up 100%, unlike my Samsung or vizio in the other rooms, the magnavox states that the vero2 is using a resolution and refresh rate that the tv does not recognize, 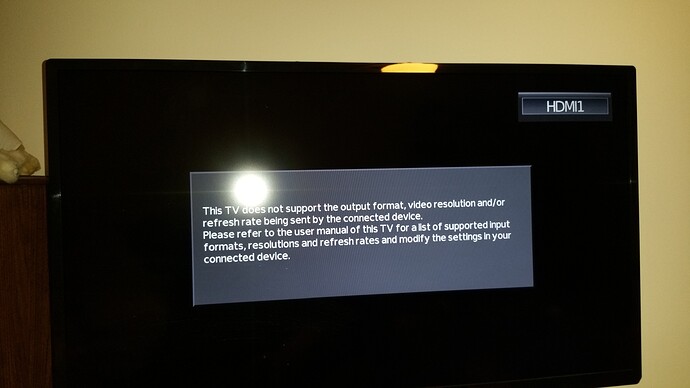 Image provided to give more details on what it says. Dunno if it helps or not.

I believe we have identified and have a fix for this issue:

[package] [kernel-osmc] initramfs: fix for static artefacts on Vero 2. Thanks to Mateus Krzaq

I’ll build a new image soon when we get some other fixes in. It should be ready for Monday evening.

Just to give you an update, I have updated my Vero 2 to the latest version (WEF 06 Mar 16) and still get the same problems. This is the link to my latest log:
http://paste.osmc.io/bejayucaja

The same behavior as previously reported is continuing. Initially the unit is usable for around five minutes and then it crashes. From that point on it steadily degrades to continuous crashes of around 10 seconds after each reboot. I don’t seem to be getting the artifacts prior to crashing since the latest update nor does the screen freeze anymore as per the video I posted last week. So there has been some progress with the updates. Do you have any additional suggestions as my Vero 2 is still unusable?

I see from your log that you seem to have the UPNP server enabled. Does it crash if you disable that ?

Other users have reported crash related bugs in Jarvis when UPNP is enabled on the Raspberry Pi so there may be a general UPNP bug in the current version of Kodi. You may need to delete your Kodi preferences to revert to defaults to stop it crashing before you can reconfigure your settings. From SSH:

Now Kodi should boot with default settings - configure your normal Kodi settings but do not enable UPNP. Let us know if that has any effect.

Ok, again there was initially some improvement as I got at least 10 minutes of video playback this time before it crashed. I forgot to re-enable logging after reverting to defaults so it didn’t capture that crash. I did not adjust any of the default settings except to commence scrapping my movie library.

The display artifacts prior to crashing and display distortion and buzzing noise are also back.

I have updated to version 2016-02-04 and my issue is still unresolved. The only consistent thing I can say is the unit works for between five and ten minutes before failing and then becoming unusable for around two hours (fails to load without immediately crashing). After two hours turned off, the cycle may then repeat. For what its worth, attached are the latest logs:

I’m convinced that the issue must be hardware related in my particular unit only as most other similar problems on the forums seem to have been identified or resolved by the OSMC team fairly promptly through the updates. Do you have any further suggestions or recommendations as this issue is starting to become a bit frustrating?

If you have only updated via My OSMC then we would recommend you do a fresh install with the latest image, as a couple of the bugs that we fixed were causing corruption, so after you have updated although the bugs are fixed prior corruption would still be present and cause you issues.

The only consistent thing I can say is the unit works for between five and ten minutes before failing and then becoming unusable for around two hours (fails to load without immediately crashing).

What do you mean by crashing ? Please be more specific than that. Do you mean the whole system freezes ? Or Kodi crashes back to the sad face screen ? Can you still log in with SSH when it has “crashed” ?

For what its worth, attached are the latest logs:

I don’t see any sign of a Kodi crash in those logs, so assume you had rebooted before capturing the log ? Unfortunately the log doesn’t help if this is the case.

If the crash you are seeing is something where you can still connect with SSH, then when it happens please log in with SSH and run grab-logs -A to capture logs.

I’m convinced that the issue must be hardware related in my particular unit only as most other similar problems on the forums seem to have been identified or resolved by the OSMC team fairly promptly through the updates. Do you have any further suggestions or recommendations as this issue is starting to become a bit frustrating?

Until you’ve done a fresh install of the new image instead of an upgrade I would not assume it’s a hardware problem.

I did a full re installation to this version and repeated tonight. Still have the same issues.

As a side note, one of the things that convinces me that it is hardware is that re installations fail if I have been using the unit too long (if I have been working on it for more that 10 minutes). If I leave it turned off for a few hours, then it installs without any issues using the exact same image.

When I say crashing it consistently follows this pattern:

As I said in previous posts, this pattern is repeatable and consistent irrespective of which version I have installed.

After it starts the sad face loop, I am unable to log in via SSH as it doesn’t give me enough time between responsive periods. I used grab-logs -A to capture my previous logs after rebooting the device due to its lack of responsiveness. This log was captured after a hard reboot and crash to sad face
http://paste.osmc.io/ojirititux

I would disable Kodi with sudo systemctl stop mediacenter and leave the Vero on for an hour or so. Do you still get glitches? This will provide a clue as to whether the issue is Kodi related or not

DBMandrake - Attached below is a short video of what I have been referring to as a crash.
https://onedrive.live.com/redir?resid=3812593410C192AA!3494&authkey=!AAb3rEZgF8Vg_Xs&ithint=video%2CMOV
SSH or screen inputs don’t work at this point. I am able to force it using confluence however it also occurs on the OSMC skin (though less predictably)

Sam - I disabled Kodi as per your instructions. No glitches appeared after one hour, just a black screen with six text lines on the top left side.

Thanks for reporting back. Can you try this?

Might take 30 mins or so for the CDN to get those new kernel files. After installation, run ‘shutdown -h now’ and unplug Vero from the mains for 60 seconds.

Can you also confirm that the Vero is still responding over SSH after all this time?