Haven’t had a chance to look at this yet. You can use an fstab mount to override this for now.

I have no idea if this is specific to the Bullseye test build or not, but I’m not getting any audio output on some YouTube videos.

Here’s an example: “Spot Me Up” | The Rolling Stones & Boston Dynamics - YouTube 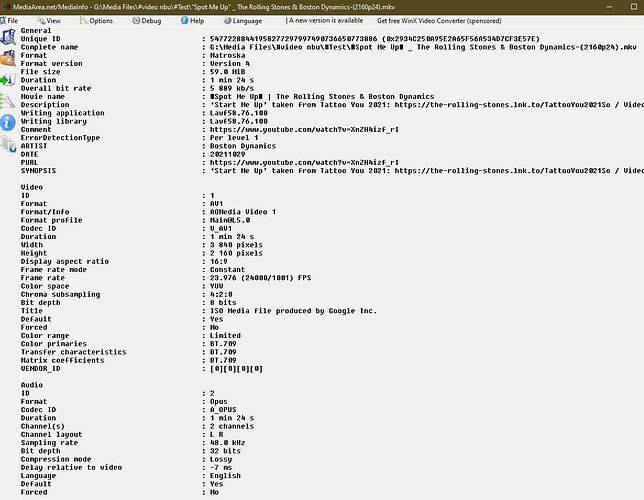 The March version isn’t Bullseye based.

AV-1 isn’t supported on OSMC at this time.
It will need a hardware refresh to play this codec reliably on ARM hardware.

Is there a plan for a hardware ‘refresh’ , i.e. the next gen Vero ?

No new Vero any time soon.

@sam_nazarko , in that thread you mentioned something about making arm64 builds available. Any plan for that?

Could be related, but in my testing the video framerate was irrelevant. The key parameter was the audio samplerate. But can’t remember whether I tried video framerate conversion.

Changing audio “Output configuration” to “Fixed” also gives me audio output, as does playing the 720p stream rather than the 2160p one, so it’s probably that.

@sam_nazarko , in that thread you mentioned something about making arm64 builds available. Any plan for that?

New video stack should solve that.
We can look at ARM64 builds next year. No support for Widevine however.

I’ve been having an intermittant issue with the latest debian build where autoplayed content occasionally results in a crash. When the crash happens, the media stops playing, the screen goes black, then I get the usual blue unhappy face screen, except only the top ~30px are visible. Kodi then automatically restarts, yet only the top ~30px or so are visible. From there, only a reboot solves the display problem.

It happens with a variety of content at different resolutions, only when played via an autoplaying up next addon (up next by im85288), and only occurs ~10% of the time.

I’ve a theory that it is perhaps due to some form of race condition with resolution or mode changing that occurs at playback start and stop, which also seems to occur when changing content.

If the logs aren’t reflecting the kodi crash, I’ll grab the logs again on next crash.

New video stack should solve that.

We can look at ARM64 builds next year. No support for Widevine however.

Hopefully the new stack solves it because this is still a long time to wait (and to be on the last leia release; is already starting to become painful with some addons). the only reason I’m talking about 64bit mode is because of the feeling I stated above (but it might solve nothing).

Why do you think that?
The stack has been available for testing for some time.

Why do you think that?

Just from some stuff I digged online (like kodi github) and from the fact it works on x86 and on the firestick (even though I’m not sure the stick is running in 64bit mode). Anyways, It might have nothing to do with it…

The stack has been available for testing for some time.

Can you point me to an image I can used which has it? I’m surely interested in checking if it solves the issue…

I see this testing thread which is closed. Is this the video stack you are referring too? AFAIU, it’s already part of the latest release (which I tested and is still not working). Am I missing something?

No – I’ve sent you the details.

Thanks… I will give it a try

Just a heads up the Plex for Kodi add-on is broken with this release until Plex pushes an updated add-on. The current add-on can be patched to work in the meantime. If anyone is interested just reply to this post and I’ll type up some instructions on how to do that.